Remembering the Great Storm of 1987

Last Monday marked the 25th anniversary of one of the most ecologically devastating storms in Britain’s history, a veritable horticultural genocide that stripped the countryside of a great number of trees among its ancient woodlands in the space of just a few hours.

However, just as a terrible disease will offer unparalleled insight into the workings of the human body, this historic blight is not without its rewards. Judging the storm in hindsight means we can reflect on which parts of our forests were most gravely affected and why – specifically, which types of trees, and which of their characteristics is it that makes them susceptible to these kinds of incidents.

Peter Buckley gave this insight into the discriminatory factors that may have lead to so great a loss,

…Those that had been in situ for a very long time had had time to spread their roots, or trees on the edge of plantations that did not have so much competition on the outside of the stand, these stood up and did pretty well.” 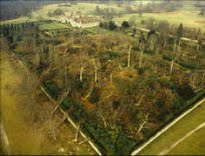 Having lost over 15 million trees in the event, it was crucial that the National Trust and Forestry Commission quickly assess the long term effects of such a deluge explains the head of forestry Ray Hawes:

“Just after the storm, one of my colleagues went over a lot of our parks and gardens and took a lot of aerial shots in order to get an idea of tree and woodland damage.”

But, in retrospect, it has been found that the purging action of the storm, though somewhat heavy handed, may have in fact helped buffer the dwindling ecosystem of some of Britain’s major woodlands. In fact the storm has been described by many, including Dr. Keith Kirby, as a ‘blessing in disguise’ because at the time of its arrival many of England’s canopies were on the verge of closing and, by thinning the numbers of taller trees, allowed many smaller species of flora exposure to the sunlight of which they were being deprived.

“”Until then, we had not fully appreciated just how uniform our woods were becoming….

…The last remnants of active coppicing were also dying out, so the woods were getting into a fairly dark and shady state.”

A study that was begun in 1971 focused on 100 woodland plot across the UK and, disturbingly, it revealed how the biodiversity of our forests – predominantly at floor level -was in steady decline, and this correlation remained true for all but 10 of the plots under study who were found all to be situated within the pathway of the storm.

While these findings are far from conclusive on the beneficial effects of the storm, the connection between the declining variety of our woodland flowers and the increase of shade levels in those environments is undeniable.

…The storm might have given them a temporary respite but, unfortunately, it was only temporary and the decline is now continuing.”

Dr. Peter Buckley, who is associated to Dr. Kirby through a 1993 report on the storm that the pair co-edited, has stated that a secondary benefit of the storm was that it changed composition and increased the variety in many woodlands that might have been considered monocultures. 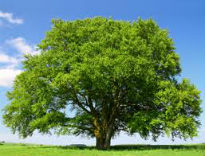 “For example, a lot of the Beech trees on the Downs were felled (in the storm) and were succeeded by Birch and other pioneer species,” he explained.

So there has been a break-up of some of the monoculture and clonal vegetation patches underneath the trees.”

And so we can either dread, or celebrate the memory of the great 1987 storm, while claiming the lives of 18 people, it may potentially have saved the ecosystems of our country from monoculture and massive ecological decline.