In recent memory no genus has seen such a spike in popularity as the Rhododendron. Although it has become a widely cultivated plant in the British Isles, the Rhododendron is endemic to the Himalayan ranges of Nepal where it is the national flower. This species also includes the cultivar known commonly to gardeners as Azalea, and is one of the most aesthetically diverse shrubs you can cultivate in Britain.

As such, it seems prudent for us to publish an article on the baby steps of Rhododendron cultivation, namely, optimum growing conditions, including their position within the garden, the level of shelter you should provide, and also which species to grow, depending on your visual preference. 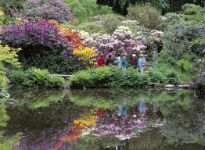 First of all you must consider how sensitive Rhododendron are to particular soil types, specifically the acidity. They prefer a ph. between 5.0 and 6.0, so if you’re soil is showing as alkaline, then you’d be best planting them in pots filled with ericaceous compost unless you plan to replace all your existing soil with something more acidic!

Rhododendrons need quite a bit of water and perform best in areas of high rainfall, however, this can present a conundrum for many gardeners because maintaining moisture with ‘hard water’ from the tap, i.e. water that is rich in minerals, will often contain too much calcium and degrade the acidity of the plant’s surrounding soil. The easiest solution to this is also extremely cost effective and ecologically sound – the recycling of rain water, either through an irrigation system, or the simple teaming of a rain barrel and watering can.

You can better establish the plant by surrounding the roots in acidic organic matter such as pine needles, chipped bracken or tree bark, although bear in mind that Rhododendron is a surface rooting plant and as such its roots should only just be covered, rather than dug deep below the soil level.

Aside from these requirements, Rhododendron is a very useful plant, not least due to the various available sizes – smaller alpine varieties can be used to decorate a rock garden and dwarf hybrids can be extremely effective in a patio garden or a particularly shady area, whilst there are also some very large varieties, suitable for even the stateliest of gardens.

Below you’ll find a list of large and small evergreen varieties to suit different colour schemes: 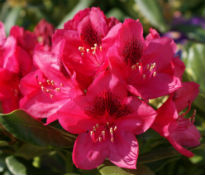 ‘Nova Zembla’ has a rounded habit, will provide rich green foliage and trumpet shaped flowers in violet red. Expect it to reach heights of 2 metres at full maturity. 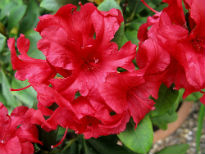 Conversely we have the dwarf variety ‘Dopey’, which in a bushy form and clusters of crimson blooms. It will grow to about a metre tall. 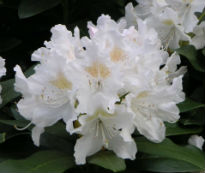 ‘Cunningham’s White’ is a large evergreen shrub with a height and spread of 1.8 metres, however, this will only be achieved after a lengthy growth period of at least a decade. In the meantime it will produce funnel shaped white blooms in abundance. 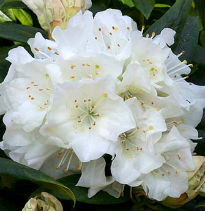 ‘Dora Amateis’ is a significantly smaller shrub at only about a metre tall, and as such would be better suited to a patio garden or bed.

For a more rose toned garden we have the choices ‘Albert Schweitzer’ and ‘Dreamland’. 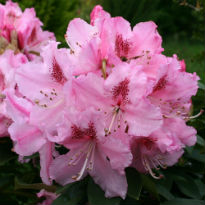 The first, being of the larger ilk, will have an ultimate height and spread of around 2 metres and it will bear domed clumps of deep pink flowers,  with a central red blotch, and mid green foliage year round. 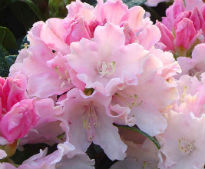 ‘Dreamland’ is the more delicate of the two, with a far milder shade of pink and diminutive stature, reaching heights of little over a metre.

We have two varieties whose descriptive names are only outmatched by their physical beauty – ‘Purple Splendour’ and ‘Night Sky’ are both evergreen shrubs, but their similarities stop there. 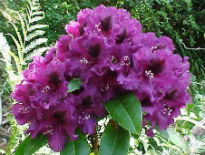 Expect ‘Splendour’ to reach heights of up to 2.5 metres and ‘Night Sky’, being a dwarf, to barely break half a metre. ‘Splendour’ will bear rich green, glossy leaves accompanied by frilly deep purple blooms, 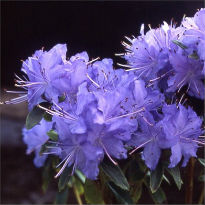 while ‘Night Sky’ will provide violet-blue trumpets to offset its pale green colouring.

A pair of eponymously regal flowers are ‘Horizon Monarch’ and ‘Princess Anne’.

We’ll begin as usual with the larger of the two – ‘Horizon Monarch’ is an upright evergreen shrub with leathery green leaves, complimented by funnel shaped yellow blooms, which are often streaked with red, that you can expect to halt growth at around the two metre mark. 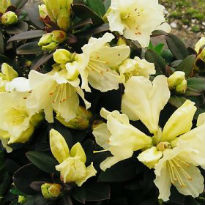 ‘Princess Anne’ however will only have a maximum height and spread of 0.6m and will bear bushels of green-yellow flowers in abundance.

I hope this piece has been informative and, as a parting note, remember the life span of Rhododendrons is a lengthy one and you should take into account their often decades-long growth rate when planning your garden, but they are definitely worth the wait!

Invasion of the plot snatchers
Blue is the Colour