RHS Photographer of the Year 2012

The results are in on this year’s addition of the eponymous award, having enjoyed participation in record numbers from around the world as over 8,000 entrants were scrutinised by a judging panel including Chris Young, editor of The Garden magazine, and children’s television personalities Dick and Dom, who endeavoured to encourage horticulture among young people.

Champion of 2012 is a photographer named Josie Elias, who submitted a stunning tableau to the ‘Gardens through the Seasons’ category. However, there were innumerable different specialties which each had their own ‘number ones’ and we’ll explore some of these now. 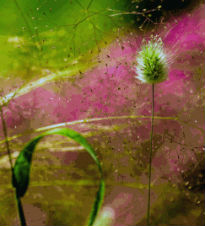 Alan Walley won first place in the ‘Abstracts and Details’ category with a superlative use of simplicity in terms of content, however, it is the colours that are the real star, as they seem to hold some esoteric meaning in themselves.

The ‘Plant Portraits’ category was headed by photographer Tom Hard, for his inverted view of a weeping willow. 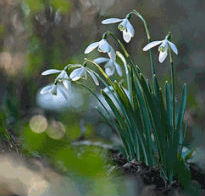 Jacky Parker, (who also championed the ‘Wildlife in the Garden’ category), was placed second with her close up of a snowdrop. The minute focus of the shot, coupled with an extremely narrow depth of field, lends masses of significance to an otherwise unremarkable specimen.

Wildlife is one thing but what of the people of a garden? This year’s category winner was Lesley Chalmers’ rendering of a communal plot, rife with activity around a central table of produce, and overshadowed by the darkened skies we became so familiar with this summer. 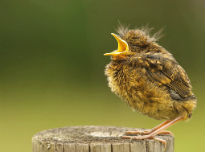 Finally, outside of adult competition, we have the ‘Young Photographers’ and ‘Child Photographers’ awards, won by Alex Berryman who won with a provocative capture of a young robin, singing its lungs out and bronzed in the feathers of adolescence 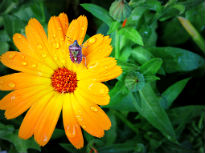 and Amber Rose Amos stole victory in the under 11’s category with a marvellously colourful rendering which also included a mote of wildlife.

Check out the other entrants for yourself at the RHS website – suffice to say this was a stiff competition and any entrants we haven’t mentioned are certainly worth your viewing.

Gardens for the Mind
Aware of Ash Tree Infection