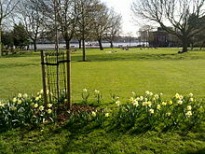 In one of my recent visits to the East End, a friend of mine, and a local resident to the Stepney end of Tower Hamlets, imparted some disturbing news. Those of you familiar with this area of London will readily recall the urban dominance of tower blocks and concrete and steel. Needless to say green spaces such as parks, are few and far between and the abundance of vertical living spaces affords few people the luxury of a garden.

I took time out to interview Roger Mills, a resident of the Pitsea estate, while I was there to get his thoughts on the rarity and subsequent value of such areas.

“Before we were relocated to the maisonette we didn’t have a balcony let alone a garden, and it meant instead of spending an hour packing bags and the kids off to a local park they could step out the back door. The way these flats are built you’d need to ride the elevator ten floors just to see what the weather was like… And there’s also the social aspect, we can pop our heads over and see people taking care of their gardens and smell their cooking, generally keep up with the community… So I’m really into inner city gardens but obviously they’re impractical in large numbers.”

As Mr Mills suggests, when possessed of a garden yourself then the need for public spaces becomes less apparent, particularly for children, however he also makes clear that it is a fortunate family that finds themselves afforded such a space in the inner city. That is why it is critical to protect and keep those spaces publicly available to compensate for this deficit.

I’ve talked to death in previous articles about the various psychological and emotional detriments of not having a green area and so am now obliged to mention Shadwell Park a.k.a. King Edward VII memorial park. First opened in 1922, it has long served as a commemorative site for the King himself and also for a group of sailors lost to the Northern sea in their pursuit of India. Today it boasts one of the finest views of the river without climbing a set of stairs- a view currently under threat.

Until recently an initiative by Thames Water had selected this historical garden as the construction site for its new ‘Super Sewer’. However, that plan was quickly batted down by local families with the support of Tower Hamlets council and the office of the Mayor of London. Unfortunately, this has not guaranteed the parks safety, as the subsidiary section of the plant, a forty five foot high ventilation shaft, still looks to be located at the front of the park. While part of the park may survive such changes, there are one hundred trees, a children’s playground, children’s football pitch and the bandstand that earned the park’s raucous reputation, would be lost. 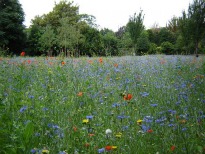 Perhaps the greatest outrage amidst all this is that despite this being called an eco-friendly move designed to save the River Thames from the failing Victorian sewers, a flower meadow known to be host to the endangered stag beetle would be among the sections destroyed. And what can we do? The meeting date has passed unfortunately but history has shown us that outright protest has no allotted time or date, and if and when the bulldozers rear their heads it falls to us to stand firmly in front of them, to protect our parks and each other.