Reed banks are becoming an increasingly threatened biosphere in Britain as is discernible from the recent press coverage they’ve been receiving, not to mention initiatives such as Lodmoor and Radipole Lake Reserve in Dorset.

In fact, in a recent new release, the publication ‘Southern Farmer’ stated they are currently the fastest disappearing microcosm and that one of the key factors contributing to this decline is the lack of maintenance that garden ponds’ natural counterparts are receiving, hence the impetus for projects like Radipole Lake that are essential to protecting wildlife, such as the Bearded Tit, and its natural ecosystem.

Marshes and swamps have seen a catastrophic invasion by the agricultural industry in the last two hundred years due to the natural capacity of our native wetlands to support both plant life and huge bodies of water,. Nick Quintrell is the warden of the Weymouth Wetlands, where Radipole Lake is situated, and he stated that reed beds are unique among natural habitats, due to their transient nature, that before human interference they were naturally maintained and halted by the global procession of flooding, but in today’s artificial landscape they cannot survive without constant care and attention. 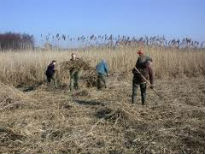 Quintrell went on to say

“Reed cutting prevents the beds from drying out and being taken over by scrub and woodland. We cut different sections at different times to create a mosaic of differing age structures… for example it provides birds such as Bearded Tits, with a brand new food source every year.”

However, reed bed maintenance is not only an ecological endeavour, but it also provides a commercial alternative to the plants degradation as, when the reeds are properly maintained, they can be harvested for the use of commercial thatching and, in times like these, we must encourage any native product as much as possible.

Now obviously we can’t all donate thousands of pounds to one of the aforementioned initiatives, however, in the months leading up to this piece there’s been a lot of talk concerning green corridors and that’s where you, Mr. or Ms. Home Gardener, come in. A green corridor essentially refers to any ecologically developed piece of land capable of supporting large scale biomass within a dominantly urban or artificial environment. 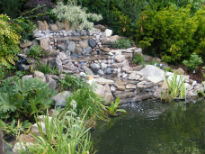 Thus, because of the dramatic decrease of wetland and other natural habitats, the importance of home grown alternatives has become critically important to Britain’s wildlife and as such we’re going to provide some starter points on how to maintain your own miniature wetland or pond in your garden. 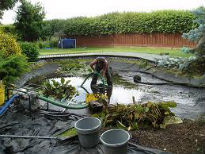 One of the most important factors in healthy pond keeping is the technique and timing of your cleaning cycle. While there are arguments for various methods we will stick to the simplest and hopefully, most cost effective.

First of all the reasons for cleaning – accumulated debris such as leaves and catkins not only sap the oxygen from your pond, but in the decomposition stages they can make it a breeding ground for nasty bacteria or worse, release poisonous gases.  A simple trick to avoid toxic gassy build up in winter is to cut a hole in the ice over your pond to prevent the fumes from accumulating, however, should you see signs of these gases, such as broken egg shells, then you should remove any fish or other wildlife immediately before continuing your clean.

The simplest means of filtering your pond water presents itself during the construction phase, if possible, install a drain at the bottom of the pond, allowing you to simply drain the water out and easily remove any debris, however if you are beyond the building phase then it is feasible to use a net to sift out larger debris as you would a swimming pool.

Of course when revitalising the water levels of a pond, care must be taken to avoid saturating the native supply with chlorine which is inherent to the majority of municipal water systems, and to avoid this a carbon filter can be installed wholesale to your homestead. Otherwise it is best to retain some of the original pond water and mix it with the tap water to refill.

The best period to perform the clean will be the beginning of winter, when the majority of the pond life will be hibernating and also to avoid festering of large amounts of debris while the pond is frozen, causing an anaerobic build up. While spring is also an effective time, due to the build-up over winter of biomass, like leaves and seeds, you dice with disturbing new hatchlings or spawn and thus disrupt the biosphere you’ve established.

A common mistake when maintaining the pond garden is to be overzealous in ensuring a good water level. Remember that ponds are organic things and you should expect a relative fluctuation in water quantity depending on the weather. Also, some species are more inclined to inhabit drier, mud based environments, and Newts are a fine example.

Finally, it is not the surface area of water that counts, but rather the depth and biodiversity – try to plan your planting in order to construct an underwater maze for wildlife and remove, or buffer algae and weeds wherever possible with natural remedies like Barley Straw to maintain a healthy mix.

Front Garden Design
The Darker Side of the Forest