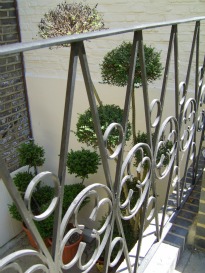 Defining the border between privacy and security is a particularly precarious balancing act, especially when you are situated in the close quarters of urban living. In our previous article concerning hedges we named a few species which could provide adequate measures of both, without completely segregating you from neighbouring areas. However, there are other methods, aside from hedging, that you can utilise as both literal and illusory shelter, whether by soft, or hard landscaping. 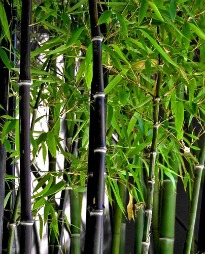 Bamboo has become a popular alternative to the traditional hedge in recent years, due to its unparalleled growth rate, seemingly impervious hardiness and contemporary feel. The other advantage of bamboo is the fact that, as a screening device it can be tailored, through pruning, to the level of seclusion you wish to maintain.  It is important though to ensure you plant the correct species of bamboo as not all varieties are suitable for smaller gardens, or designed for effective boundary planting.  Phyllostachys ‘Aurea’ and ‘Nigra’, and Fargesia nitida are clump-forming and do not spread too quickly, so are good for this. Bamboo’s reputation for virulence may make you complacent enough to only plant one rhizome, however, for a full and lush spread you should plant about one metre apart along the length of the area you wish to screen. 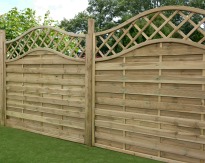 Of course, the most common forms of screening are walls and regular timber fence panelling or trellis. Walls can be brick built, for the more traditional garden, or rendered and painted for a more contemporary feel. Gabion walls, or walls created by filling wire cages with pieces of stone, are becoming more popular too. Fence panels come in many different styles ranging from complicated bespoke designs, to the more economic featheredge or  waney-edged panel. Of course the panel can be topped with an additional level of decorative trellis to provide support to climbing plants, however, the panel itself is terrible for allowing light to enter the garden, and, like walls can be oppressive in their solidity. The excellent thing about these options though, is that several different types can be combined with the right eye for design, for example one might alleviate a dreary stone wall by adding ornamental ironwork,  which in turn can be decorated with climbing plants to reduce their institutional feel.

A less intrusive alternative to a new wall or fence panel, are shade sails, which have seen a steady increase in their popularity since their conception, and this is partially due to their cost effectiveness (as the material they utilise can in some cases be recycled from other uses), but also because of the ease of their installation and general attractiveness. It has become a common motif to combine a timber deck with a white or blue shade sail to lend the space a nautical atmosphere, and in winter you can simply unhook them and store them until the good weather returns. 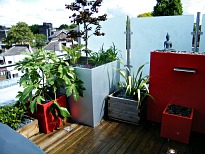 There are also different types of glass and perspex screens that can be installed, instead of the various wooden and metal alternatives. Frosted glass is often employed in bathroom windows to afford an appropriate level of privacy whilst not darkening the room by removing the opening completely, and this psychology can be similarly applied to the garden. Shadows of planting through frosted glass can also have a very dramatic effect. 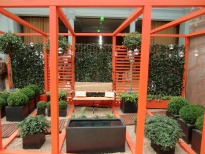 Another means of bordering that combines the schools of both natural and artificial, are structures like trellis dividers or pergolas which, similar to bamboo, can be tailored to admit or decline more sunlight, and thus greater exposure, just as you wish. The point of these structures and plants is to give the illusion of seclusion rather than outright segregation, and thus, sometimes, a fully realised structure is unnecessary. Studies have shown that part of our human instinct is to assume shelter, even though it may be absent because of our tertiary environment. Hollowed walls and ceilings are good ideas, and I saw excellent examples of these as demonstrated by two of the 2011 RHS Young Designer of the Year finalists, Alexandra Froggatt and Owen Morgan, who I was fortunate enough to catch at the RHS London Plant and Design show recently. 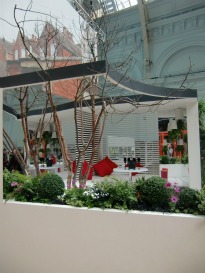 Froggatt and Morgan were exhibiting an extremely common, but fairly overlooked garden motif, that of the alleyway garden. The primary focus was how best to utilise the limited space of such a garden and perhaps give the illusion of more space than is actually present. Both employed a sort of unfinished sitting area with partial shelter, and the first was composed of a surrounding trellis painted crimson. The structure consisted of horizontal slats that, ironically, first resembled prison bars, however, the offset of complementary planting served to dampen any feeling of oppression one might have otherwise felt in the space. The second space was far more elementary in its design, in that its raised seating was sheltered completely, except by the near corner which consisted of an open plan stairway. However, this design seemed far less bold as it still relied on conventional structure and the ever illusory colour white to provide its merit of space, rather than its composition alongside appropriate planting.

In conclusion, when considering what method and materials to use in order to provide definition to your space and to provide some privacy and security, it is as well to look beyond the traditional and realise that there are many other alternatives out there that might provide a softer and less obvious screen.