In recent news, a gardener in Somerset has reported the death of a Great Tit at the hands, or rather stems, of one of the Nepenthes specimens he cultivates. Having been only the second recorded case of a bird falling prey to this species, Mr. Hewitt-Cooper was reportedly ‘staggered’ by the discovery.

Despite being static creatures, any good gardener knows that leafy carnivores exist in their thousands and this week I want to celebrate the ingenuity of some of natures most ravenous.

At the top of the list, the notorious Venus Fly-Trap inhabits areas of low nitrogen count, generally bogs and wet plains, but provides a shaft of colour wherever it grows. These specimens snare their prey using a clasping jaw comprised of heart shaped petals.

The petals themselves are barbed with ultra sensitive hairs that work, similarly to many fast food establishments, on the twenty second rule. Once one is triggered by the weight of an insect, there is a twenty second delay and if further hairs are moved in this time then the trap closes. It is a diminutive species, despite its habits, that forms a rosette shape with a central flowering column. Their diet generally consists of small insects and arthropods though some larger species have been known to catch mice and even small birds in their grip! 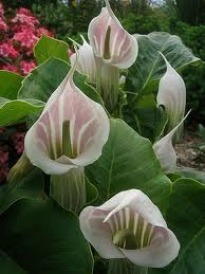 Following this we have the Cobra Lily – rare in the field, though endemic to the marshes of northern California and Oregon. Like the majority of carnivorous species, the Cobra Lilly thrives in nitrogen depleted environments and this is because their unusual diet can supplement any lack of the element that might detriment their health. Similar to the Venus Fly-Trap, their fronds and leaves are highly adapted to their hunting method.

Common to other ‘pitcher plants’ are its downward facing hairs that line the inside of the flower and hinder any animal’s attempts to escape once they’ve been enticed by the moist nectar pumped up from its roots. The plant is so sophisticated that by inverting its thin petals to shrink the exit, it also creates illusory sources of light through its translucent flesh, thus tiring any prey with false prospects of escape until it falls, exhausted, into the digestive bell. Until recently it was believed that the Cobra Lilly produced no digestive enzymes with which to ingest its food and rather depended on symbiotic bacteria, however studies have since suggested that it secretes at least one digestive enzyme. 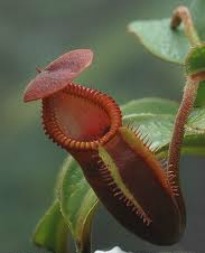 Perhaps the rarest species in our line up is the Malayan Nepenthes A.K.A Monkey Cups, another genus of pitcher predator. However the really amazing feature of this plant lies not in its ability to outwit or fell the more mobile inhabitants of the islands, but in how it can serve them. For example, the native Carpenter Ant of Borneo employs the upper hollows of its deadly pitcher as a nesting site. In return the crawlers remove the larger prey from its spout and thus aid its digestion by disposing of past prey’s remains.

On a larger scale the top of its lid provides a sweet reward to invertebrates that perch there, particularly the local tree shrews. The shrews repay this favour by buffering the plants nitrogen intake with the subsequent excrement they produce. 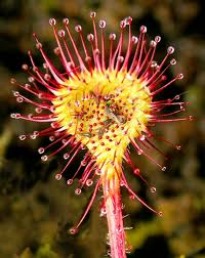 Drosera are possessed of a very unusual trapping method. They use a system of tentacles protruding from their limbs similar to the Octopus, however they avoid the suction methods that these eight legged monsters are famous for. Instead, Sundews, as they are commonly known, present to nearby insects a series of long fronds barbed with these tentacles at the tip of which lies a sweet and sticky secretion by which the bug is first seduced and then ensnared.

Immediately the fronds will curl back on themselves, trapping the insect between more and more barbs and thus more secretion. While the prey succumbs to exhaustion or drowns in the death syrup, further digestive enzymes are released to dissolve the remains and prepare them for nutrient harvest. Most common to Australia and New Zealand, these plants have refined their method to the point that they can tailor secretions to simultaneously attract prey, whilst sparing potential pollinators. 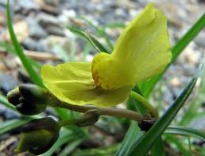 The Ultricularia or Bladderwort species is by the far most durable carnivore mentioned here. It can survive any habitat partially possessed of fresh water, only the poles and a smatter of oceanic island are unable to sustain it. The flower is the only part to ascend beyond its watery base, and due to its copious distribution this could include anything from a pond surface, to the dew of a rainforest canopy.

Considered the most sophisticated trapping system in the plant kingdom, this is the only hunter on my list that uses a vacuum as its means of entrapment – a pair of thin but rigid membranes form the eponymous bladder of this genus. As water is pumped through the organism, a vacuum of pressure builds within the bladder leaving it primed to spring. What’s so amazing about this is that it makes the Bladderwort the only organism in the world whose hunting method is entirely mechanical – it requires no reaction from the plant itself to catch prey. 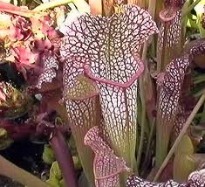 The Trumpet Pitcher is an especially easy species to cultivate and like many of my list’s populace, it thrives in full sunlight and marshy conditions, however it will also survive in a conservatory or pot on a window sill, provided it is well watered. The benefits of this particular species are huge. For one thing it is very willing to hybridize with other genus types and so you can more or less tailor its colour, size and shape to your own palette.

Furthermore, they provide an eco friendly means of pest disposal, possessed as they are of a healthy appetite for blue bottles, house flies and wasps. They are also loved for their spectacular flowering in early spring, which again can be tweaked by clever cross pollination or merely careful selection of your original specimen.

Finally we have Brocchinia Reducta, a native killer in South America. The structure of this plant comprises tightly overlapping leaves and each of these is layered with waxy scales, loosely attached to the flesh of the plant.

The complexion of these shards causes a reflective effect of ultra violet light that, combined with the sweet nectar it produces, attracts insects. This tunnel of leaves stems from a cup that collects fluid forming the nectar, and the waxen scales tumble under the insects’ feet until they eventually succumb to the cup and drown.

So, there it is – you’ll either be revolted by these insect munching specimens or fascinated by them. Either way you cannot deny nature’s infinite ingenuity.

The Shelf Life of a Show Garden
Free Trees!