Slugs and How to Deal With Them

With all the rain we’ve been having, we’re all familiar with the slimy menace that is the common garden slug and their infuriating taste for our favourite plants and their foliage. Of course there are many commonplace methods for dealing with the blighters however, much as we complain, our own native crawlers may have only been the harbinger of a greater approaching storm i.e. ‘Arion Flagellu’, aka the Spanish Stealth Slug, who, due to their superlative breeding capacity, look to be invading gardens across the country.

You may be curious as to why it is only now, after years of importing Spanish produce and greenery, that this species has reared its ugly, shiny, menacing head. The reason, sure enough, is believed to be related to the terrible weather we’ve been having lately – the abundance of rain we’ve been suffering has made it possible for this new breed of ‘super slug’ to gain a foothold in the British Isles. Due to its ability to sustain hundreds more eggs per breeding cycle, the stealth slug is able to multiply far more effectively and coupled with this, they bring with them a myriad of new diseases to which our native species have not had the opportunity to adapt and this aids the newcomers in overwhelming the competition. 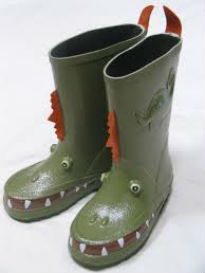 In light of this approaching threat, we’re devoting this article to the most effective means of disposing of critters such as these, as tested in the field by our qualified slug busters, although if your preferred method is the hard heel of boot, then they may have to change the name from ‘Wellingtons’ to ‘Trafalgars’! 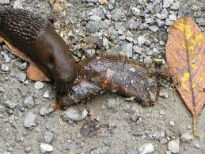 Now when it comes to extermination the important thing is to play to the enemy’s weaknesses, so what do we know? Slugs are slow, they’re slimy and, grim though it is, they’re cannibals. As such, one of the most effective, if somewhat horrifying, methods of disposal is to crush a couple of slugs near a hot spot (the shade of a hosta for example) and await for others to congregate around the free lunch, then squish them as well!

Next we have their susceptibility to dryness – most of us are familiar with the non-romance to be found between a slug and a salt-shaker (think wicked witch of the west). However not all of us want to spend our nectar points on chemical warfare, so below you’ll find a list of organic, cheap and effective alternatives that will see the malevolent molluscs falling in droves, or at least make them easier to collect and get rid of. 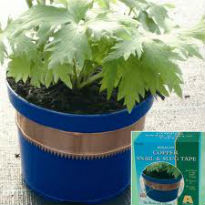 Coins, wiring, plates or sheets – copper bands for your pots can be bought from the garden centre, or if you can get your hands on scrap copper then use it to build a wall around your plants; the metal will react with the slime and act as a form of electrified fence. 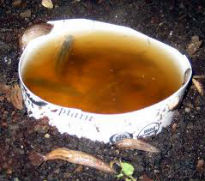 Any left-over beer from the weekend? Just because it’s flat, doesn’t mean it’s useless, build a trap in the form of a Tupperware box, or half a lemonade bottle half-filled with beer, and half submerge it -the scent will bring slugs in – their lack of water wings will keep them there!

Any hair left over from a home trim, or from pet grooming, makes for extremely uncomfortable sliding, giving the slugs both sore lacerations and pause for thought. 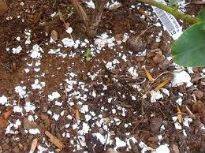 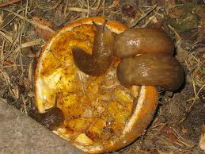 Put down hollowed out orange or grapefruit peel and the slugs will congregate underneath them, making them easier to collect and dispose of.