Ferns are something of a British institution, being one of the most common members of most of our forest and woodland based eco systems. Ferns are also an extremely diverse family of plants, as they can be suited to a variety of different weather conditions and situations, and varieties can be found for virtually any garden. In this piece we’ll be discussing a small selection of varied ferns that can be raised in the domestic British garden and the conditions required to ensure they maintain good health.

More commonly referred to as ‘Hart’s Tongue Fern’, Asplenium scolopendrium is an evergreen fern which will form a dense bouquet of arching, leathery, deep green fronds with frilled edges. It propagates by way of the spores that develop on the underside of its leaves, identifiable by the stripes they form on the leaf’s surface. Grow in humus-rich, moist, but well-drained soil.  Due to their vulnerability to sunlight, it is imperative that they are grown in at least partial shade and they also prefer a neutral or alkaline ph. level.

This fern is a particularly beautiful as one can tell from its titular description, ‘Silver Falls’, the ‘Japanese Painted Fern’, as it is also known, has a beautiful silver tint to its leaves and fronds made particularly vibrant by sunlight, which makes it such a shame that it can only be successfully sustained in full shade! It is also deciduous, although it will maintain this colour throughout all seasons on finely divided, lance-shaped leaves. For best results these should be planted in shade, in moist, fertile soil with an acidic ph. level.

The first tree to make it onto our list, with the potential to reach about six metres tall, Dicksonia antarctica has a brown, fibrous trunk and broad, arching deep-green fronds. It should be planted in a shady position, preferably under other deciduous trees. Ensure the stem remains well watered in the summer season but avoid watering the crown in winter as this will increase the likelihood of frost damage. Plant in an acidic, loamy soil, ensure that it is not too exposed, particularly in colder areas and stuff the crown with straw in winter to protect it from frost. 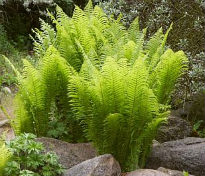 The ‘Ostrich Fern’, or as it is sometimes more descriptively known ‘Shuttlecock Fern’, is a deciduous one, having huge erect rosettes with an outer layer of bright green fronds enclosing smaller brown fronds, it will also bear non-edible cream coloured fruit in the summer and has a clump-forming, spreading habit. It is excellently suited for water or pond based gardens. Like the Dicksonia they are suited to an acid based soil content, but prefer extremely wet conditions in partial shade. 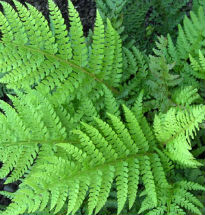 Also known as the ‘Soft Shield Fern’, these evergreens should be treated with extreme care due to the feathery nature of their leaves and thus respective weakness against the elements; they should be planted in a cool, moist and shady area. However the one advantage of these ferns is that they are fairly indiscriminate to whichever soil they are planted in, not minding acid or alkaline ph. levels.

And there we have it, a variety of ferns for a variety of locations and although they share the common characteristic of vulnerability to the elements, remember that they also share another which is key to your reason to plant  them –  beauty.

The Future of Hemp
Bamboozled