Take it to the Bank

A recurring theme of our articles has been the cultivation of plants for particular conditions i.e. the amount of sunlight or exposure they’re suited to, the depth or content of their soil foundation or the amount of moisture they require to survive. This week we’re covering one of the most difficult combinations of growing conditions that a plant can suffer – that of dry, shady, sloping banks.

Here are our top ten: 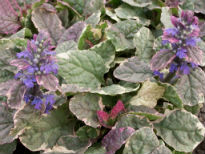 Otherwise known as ‘Bugle’, this creeping perennial, reaching a maximum of 10-15cms tall, has varying hues in its foliage which can range anywhere between red, cream, green, purple and pink and being an evergreen, it will alternate between these colours over the course of the year. It also bears blue flowers from May to August.

This vigorous, matt-forming perennial, otherwise known as ‘Sweet Woodruff’ will bear whorls of pale green, lance-shaped leaves like little parasols and clusters of small, white, fragrant flowers throughout late spring and early summer. The dried foliage also has a musty scent reminiscent of hay and has been used to flavour wines!

The ‘Hart’s Tongue Fern’ is an evergreen cultivar that will form rosettes of arching, leathery, bright green fronds with undulating margins. It will grow to about 60cms tall and requires very little attention. 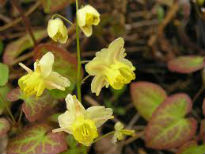 The ‘Bishops Hat’ is named for the shape of its small, clustered flowers in various colours which appear in the springtime on the wiry stems of this clump-forming plant. Being an evergreen, the heart-shaped foliage of this plant will maintain its rusty colouration throughout all seasons.

Answering to the exotic handle of ‘Dusky Cranesbill’, but also more soberly as ‘The Mourning Widow’, this Geranium is known by its tall upright, deep purple-black flower stems in early summer and clump-forming foliage which is also sometimes blotched with purple. 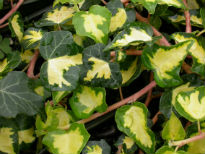 This small-leafed ivy is a wide-spreading, self-clinging vine which has dark green leaves which can turn velvety black as the weather grows colder. It is also available in yellow and variegated varieties to brighten up dull, dark areas.

Hostas are clump-forming perennials known mainly for their stunning, large, broadly heart-shaped leaves of green, yellow, blue or variegated. There are many different varieties, but they are all summer bloomers bearing white, lavender or purple, bell-shaped flowers from July to early September.

The ‘Oregon Grape’ is available in many different varieties, one of the best of which is the ‘Apollo’ cultivar. It’s a low-growing, evergreen shrub that bears glossy, dark green, holly-like leaves year-round with accompanying bright yellow flower clusters in spring. 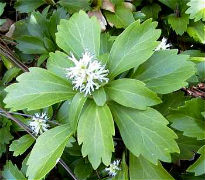 The ‘Japanese Spurge’ is another spreading low grower and as such is suited perfectly to the poor soil that usually inhabits banks. It has serrated, dark green leaves, sometimes variegated, and clusters of tiny white flowers. Due to its habits, this cultivar is perfect for growth beneath tree canopies, but don’t attempt to grow it if you have chalky soil. 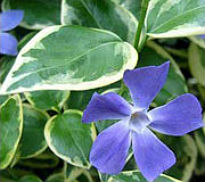 Vinca minor, or ‘Periwinkle’, is a mat-forming, evergreen perennial and with its gorgeous aesthetic, a combination of emerald green, or variegated foliage and bright blue flowers all summer long, it’s a very useful ground cover plant. If you have an enormous area to cover, go for its more rampant cousin, Vinca major.