Annual plants are an excellent way of bringing colour into your garden and, as any gardening centre will tell you, the best time for sowing them is in the height of spring from March to early June, so here at the end of May it is not too late for planting to provide late summer bloomers. Below you’ll find a list of such species that are especially simple to establish and maintain.

Known commonly as the ‘English Marigold’, the ‘Princess’ variety of this cultivar has an upright growth habit and somewhat reminiscent of a Daisy/Sunflower hybrid showing large, vivid blooms in gold and yellow with black centres. They prefer light, free draining soil in either full sunlight or partial shade and have no preference in terms of acidity. 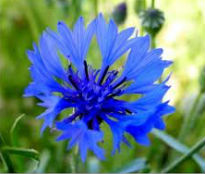 The ‘Cornflower’ is a fairly historical annual having a reputation as the flower of the Armistice and as such often toted symbolically during commemorations of the First World War, particularly those of the sapphire hue. Like the Marigold they are uprights however they prefer a heavier soil content, predominantly loam, and full sunlight.

‘Californian Poppy’ goes by many names and it’s not difficult to see how this beautiful cultivar earned handles like ‘Cup of Gold’ and ‘California Sunlight’, as they are possessed of vibrant flute-like blooms in red, orange and yellow throughout summer and autumn. They go for conditions similar to those of the Cornflower, particularly for an abundance of sunlight to best take advantage of their colouring. 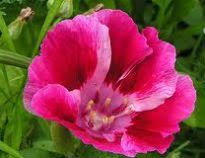 ‘Satin Flower’ is a dwarf annual with a bushy habit and Azalea-like flowers that will show in the white/pink spectrum and  whose other name ‘Little Frills’ is exemplified by the shape of their petals. It prefers acidic, well-drained soil with a heavy element, such as loam or clay.

Lathyrus, or ‘Sweet Pea’, is a climbing annual and the ‘Lord Nelson’ variety will show small, dark blue flowers and a distinctive accompanying scent. They prefer a well-drained, sandy soil and full sunlight with minimal exposure to the elements.

The oddly titled ‘Poached Egg Flower’, is grown for its titular colours and fern-like foliage; it has a clump forming habit and will continue to bloom through late summer to early autumn. Limnanthes prefers full sunlight in an exposed position and will tolerate most soil types. 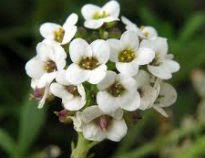 Commonly reffered to as ‘Sweet Alyssum’, the Lobularia variety ‘Rosie O’ Day’ is  a compact, mat-forming annual that will show silvery green foliage and pink or purple flowers throughout summer complete with a rich honey aroma which will attract hoverflies and other insects. They prefer moderately fertile, well-drained soil in a sunny position. 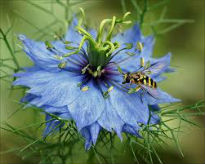 ‘Love-in-a-Mist’, as Nigella is otherwise known, is a tall growing annual with midnight blue flowers joining at a spiked centre composed of black seed pods. As you’d expect it has an upright growth habit and prefers full sunlight.

The ‘Ladybird Poppy’ garners its title from the colouring of the petals of its flowers, as, whilst it sports the deep scarlet of any poppy, this is also offset by black to dark brown blotches near the epicentre of the plant. They prefer a loam based soil in full sun with a sheltered position from the wind.

The common ‘Nasturtium’, one of the most eclectic among annual flowers with a rich variety of colouring, shape and size though they all share one common denominator: their ability to spread, either as climbers, or ground cover. Available in reds, oranges, creams and yellows they make one of the consummate additions to any annual garden and as such prefer full sun whenever possible and as much support as can be feasibly provided.

And so here ends our roster of annuals, each popular for their beauty, hardiness and relative simplicity to grow, we hope you find as much success with them as we have.

Building a Night Garden
Reclamation and Sustainability within Design