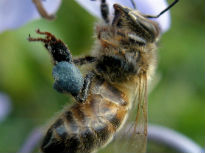 There have been a throng of ruffled feathers recently, or should I say wings, in Ribeauville, in the Alsace region of France. The area has been abuzz (sorry!) with the sudden and unusual colourings of the local bee’s pollen covered legs and, given that the global population has already been in steady decline in recent years, this was a cause of some concern for their keepers. 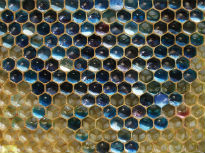 The result was that the keepers noticed that their bees had begun producing unnaturally toned honey in blue, green and red and, aside from the bees’ health and wellbeing, there were also the dire financial implications for their major commodity. Unsure of the viability and safety of such a change in their product, they set about investigating the cause and possible solutions for the problem. 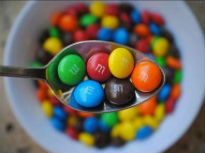 Their search did not lead far from home, as they realised the existence of a confectionary plant owned by the Mars company only a few miles away and that the plant had been storing waste residue from their popular M&M’s brand, which the bees had targeted for its bright colours and sticky sweetness. 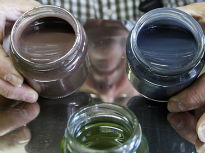 As a result the bees began producing honey in direct colour correlation to the residue they’d been eating. Fortunately the factory workers realised the scenario almost simultaneously to the bee-keepers and have now taken measures to prevent future exposure.

As a fan of the occasional sweet myself, I think it a shame that this fortuitous decoration could not be put to better use – I say roll out blue baklava and the Christmas flapjacks of green and red, but unfortunately the keepers have deemed it unsellable and will have it destroyed – shame!

Prison Garden of the Year
Creative with Chrysanthemums