In previous blogs we’ve talked about the environmental influence that our indigenous bee population has – from flower pollination and, subsequently, propagation, to their agricultural applications – indeed they are one of the most critically needed insects that exist on earth today. But rather than give another tirade about their declining numbers, or the things we’re doing wrong by them, we’ve compiled a list of plants most likely to attract the little fellows to your garden in the early spring when there’s not much food about, and a preface concerning why these cultivars, in particular, are so successful.

The key element of a flower that bees find alluring is its contrast, meaning its colours’ respective contrast with the background colours that surround them. This is why purple is a particularly popular hue among hymenoptera, as green is one of its most blatantly complementary counterparts, and also the most commonly naturally occurring colour in the bees’ endemic environment. Scent is also a no-brainer because, as a source of food, the bee judges the flower the way we might judge our luncheon – if it smells good then we’ll find its consumption appealing, whereas if it reeks nefarious, our good sense will tell us to avoid it. Bees also prefer simple, single flowers as it is easier for them to reach the nectar than it is in complicated, double blooms.

Below you’ll find five cultivars which fulfil one of these preferences (or all of them) in the earlier months of the flower season.

Although Crocus are available in practically any colour and tone imaginable, we’d most highly recommend the old-fashioned Crocus verna ‘Purpurea Grandiflora’ variety, as these are possessed of some of the most vibrant colourings of the species. While the petals will show a rich violet through mid-spring, the nectar rich core appears a vivid yellow, which shines like a beacon to our stripy friends. The primary requirement is good drainage, as the plant will not only tolerate gritty soil, it will thrive there, regardless of acidity or shelter.

Also going by the handle ‘Snakeshead Fritillary’ due to the dappled colours on its petals, Fritillaria meleagris is a small bulbous perennial with deep maroon-purple, bell shaped flowers whose pink and plum colouring in spring is also somewhat reminiscent of a chess board. This plant is also extremely versatile as it is indiscriminate toward acidity and soil quality, sun or shade, and will thrive facing in any direction. 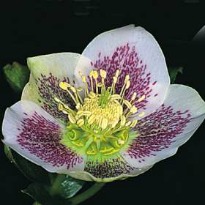 Helleborous is already renowned among the horticultural sisterhood for its beauty, but the sub species guttattus is positively breath-taking, with each stem producing a single multi-coloured bloom with wide open petals of white glittered in rose. It does, however, have quite specific requirements regarding growing conditions in order to thrive and these include a soil with good water retention, an alkaline ph level and a sheltered position where the sun does not fall too intensely. Also growers should beware – all parts of this plant can be highly toxic so one should avoid littering a space with them that is used by children.

We’ve chosen Prunus cerasifera partly due to its pretty pink blossoms, and partly due to its fruits, as, while we can surmise that a scented flower is more attractive to the bumble bee than one without, we can also assume that the sweet odour that the Nigra variety’s plums produce would be equally alluring. There is also the size of the Nigra to consider – being the only tree to make the list so far, it will be able to sustain a far larger population, not to mention withstand more adverse weather conditions. For best results the tree should be situated in a sunny position but there are no special requirements regarding soil type. 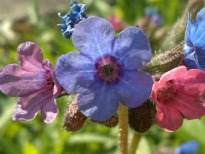 This is a semi-evergreen, rhizomatous perennial which blooms with clusters of small, funnel shaped, flowers which will appear either in late winter or early spring depending on your climate. The flowers open deep pink and later turn blue, with the attractive result of having both pink and blue flowers on the plant at the same time. The foliage is also highly attractive, with broad leaves dappled in greenish-white. They prefer a sheltered environment, but are able to survive in practically any acidity or soil structure.

Bees are an extremely beneficial addition to the garden and vital to its health – as the original horticulturalists they’ll propagate flowers far more efficiently then you or I could ever hope to. So, when stocking your borders, always bear them in mind, particularly by choosing plants that flower early (and late) in the year when there’s not so much food around for them.