Continuing our weekly segment on different plant based colour schemes, we now address red and blues first child – purple. As usual our list includes cultivation dos and don’ts, where best to place these examples to appreciate their colour and, of course, a brief description of what you can expect from each of them.

(So often misspelt as “Buddleia” that even the red brow of my spellcheck is furrowed!), is a large arching shrub with lance shaped blossoms that alternate either side of its stem. The bark of the plant is a pale brown and the ‘Black Knight’ variety of this cultivar bears long, deep purple inflorescences at the top of its tall branches.  I would suggest raising this plant with wall support or near a pergola that it might overhang your pathways and borders. If you want to keep the height in check you can cut them back hard in November or March. Buddlejas do not do well in extreme winters and will perish at temperatures below -15°C, but are generally quite hardy enough for British gardens, just plant in well-drained soil in a sunny spot for best flowering. Its nectar makes it particularly attractive to butterflies, hence its common name of ‘Butterfly Bush’.

Clematis come in deciduous or evergreen varieties and, as for its flowers, they can cover the entire plant. With this variety you can expect masses of deep-purple blooms from mid-summer to mid-autumn. Due to its hardiness, it matters very little how exposed the plant is and thus it makes for an excellent wall or pergola decoration with an approximate height and spread of 4 by 1 metres. But, for best results, aim for a sunny planting site with well-drained, alkaline soil, shelter the roots with other planting or pebbles and prune every year in early spring by cutting stems back to pairs of plump buds about 30cms from the ground. 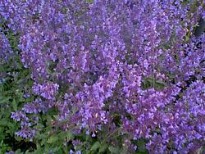 This is a resilient perennial with violet flowers that show in the summer months and, due to its density and aroma, it is well suited as a front-of-the-border, edging plant. Nepeta’s durability means that your choice of locale needn’t be painstaking – it can withstand both sides of neutral on the ph. scale and most types of well-drained soil, including chalk, although it will not flourish in soils that remain sodden in winter. It is highly drought resistant and will perform equally in either full sun or partial shade. Its foliage falls between green and silver from spring to autumn and its flowers will form in pairs astride its lanceolate stems, often with a terminal two-lipped flower at the tip. Dead-heading will prolong the flowering season. If you have cats, they’ll love its aroma – hence its common name of ‘Catmint’ – but bees love it too!

The common Lilac is an obvious addition to this list and we could find no variety more appropriate than this, providing dense clusters of very fragrant, rich purple flowers from late-May to mid-June. You can also expect a lush green foliage of heart shaped leaves and this combination of colour makes for an excellent backdrop, especially when exposed to full sun. This cultivar is fully hardy, but prefers a humus-rich and well-drained soil. Be sure to avoid acidic soils and, if you really want the full potential from this plant, then you should mulch the base with manure or compost in early spring.

The Tradescantia, or ‘Spiderwort’ as it is commonly known, is in fact endemic to our shores and, as such, it is well adapted to the British climate, often used in gardens in close proximity to the sea, due to its extreme drought resistance. Expect flowering throughout the summer months, with three-petalled, violet flowers with purple stamens tipped with yellow pollen, and long, sword-shaped grey-green leaves. For best effect, plant them in sun or partial shade, space them approximately 12 inches apart and cut back to ground level in autumn. They’ll get to about 30cms tall, so are ideal at the front of the border.