A few weeks ago I was lucky enough to attend London’s Eco build conference on the emerging role of sustainability in infrastructure on the domestic and global stage. As a brief outline for those unfamiliar with Eco build, its role is that of an annual ecological summit designed to encourage not only the advocates of this topics awareness but also the businesses that hope to provide a commercial and affordable means of propagating and materialising these ideas for both corporate bodies and the general public. The conference was held at Custom House in the East End and hosted over a thousand different seminars, lectures and exhibitors representing all corners of ecological construction, landscaping and infrastructure.

One of these guest speakers was Gardeners World presenter Monty Don who was speaking on the therapeutic and rehabilitative effects of horticulture in a community of former and current drug users. Don is widely considered to be the leading British authority in horticulture after having inherited the title from former paterfamilias Alan Titchmarsh, and his expertise is only heightened by the fact that his craft was self-taught. His project, more a labour of love, was featured in a BBC documentary under the name Growing out of Trouble which centred on several recovering heroin addicts taking warrant of a Herefordshire free holding as a means of recovery. Here Don insisted upon the needs for responsibility and routine that large-scale gardening was able to fulfil and how embracing these needs was an essential first step in the recovery process. 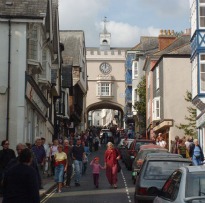 A later seminar was that held by a number of town council members from the civil parish Totnes situated in Devonshire, who among other topics, were discussing the benefits and long term sustainability of self-contained communities-made possible by such economic ventures as regional currency like the Totnes pound. Innovations such as these, which have also risen to prominence in the city of Bristol and on a smaller scale in the London borough of Brixton, ensure that the financial blood of these areas is not easily removed by short-term visitors and tourists. The scheme works based on the use of cash machines, within the boundaries of the district the machines will only dispense currency valid to the area and so while foreign capital can enter Totnes, domestic currency can never leave.

The purpose of this initiative was to aid Totnes’ continued independence as a principality and its detachment from the fluctuations of the national economy. 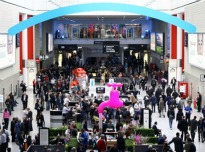 The third conference I attended was on the value of recycling construction materials and exponential growth, and how this reflects on the carbon footprint of the world’s metropolises. The topic that peaked my interest was the comparison between linear and circular metabolisms, these monikers were raised when discussing theoretical infrastructure. However this subject will be covered in greater detail in a later article as to try to summarise it here would be to do its presenter Duncan Baker Brown a great disservice not to mention undermine the seriousness with which it must be considered.

The other section of this discussion centred on the effective rejuvenation of construction materials and making the change in our ecological footprint in the construction and design phase rather than as an afterthought, reminiscent of one of the conferences key slogans “It is not enough to do things better, we need to do better things.”

In a later blog I’ll discuss the recent and continuing change in the psychology of large scale architecture and the methods by which you can ensure your own home will make a less dramatic impact on the environment such as solid wall insulation, double glazing and clean energy alternatives that are possible to integrate into a residential setting.

Stay tuned for our analysis of modern cityscapes and how consumerist psychology has led to the downfall of waste efficient, ecologically friendly cities and how you as an individual can aid the return to the equilibrium.

Flowers in Poetry
How to Look After Your Lawn in Spring