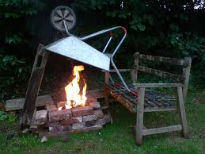 At last a turn in the weather, but in spite of all the complaining about the previously atrocious ‘summer’ weather, at least we haven’t, as a species, felt particularly threatened – unless we had been planning an imminent barbeque or even a summer wedding! 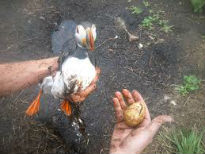 Britain’s wildlife however, not including rain-lovers like our snails and slugs, is unable to make the same claim. After what has been proclaimed as the wettest April-June period in recorded history, it has entered the news that several of our native birds and mammals are suffering a significant drop in numbers. One of the most affected cases has been the report of a community of Puffins drowning in their burrows due to underground flooding, and we’ve spoken previously about the threat that such torrential rain poses to the breeding capacities of insects, such as moths and butterflies, that rely on dry areas to lay their eggs.

The wind has played havoc as well on the propagation of certain garden variety birds, as well as their sea-bound counterparts – gales have forced gulls and other such species from their cliff-side shelters while their commonplace relatives have been hard-pressed to find food for their young with the wind constantly scattering it about the place. A whole season’s generation of Terns is under threat in Northern Ireland, due to their parents inability to keep them warm against such an onslaught of weather.

Alongside these, there have also been negative affects on England’s amphibious population. You see, the extremely dry weather at the beginning of this year encouraged breeding on a mass scale for our domestic Frogs and Toads, however the sudden and uncharacteristic onset of rainy weather has produced environments too cold for their young to survive and thus all the good work in January has been undone. 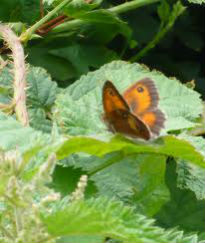 However, amid all this destruction there have been some positive side-effects, namely in our endemic flora, with the National Trust generating stories of green areas now teeming with nettles, brambles and bracken.

Though these spurts in growth and propagation have not only been limited to ground cover plants – there have been reports of mosses and flowering plants, such as the Gentian and Bee Orchids and, in an isolated case, Bedfordshire is showing swaths of Pyramidal and Common Spotted Orchids along the Downs.

Although, it also has to be said that the enormous amount of rainfall has also led to the oppression of many of our beloved summer flowers, particularly those more susceptible to adverse conditions, but despite this Poppies have been able not only to cope, but to thrive.

However, the National Trust’s conservation adviser has warned that those species that have benefited from the wet weather are grossly outweighed by those who’ve been set back and that we may face the extinction of some of our native species, butterflies specifically, were it to continue.

He went on to say that without a turn in the weather, and thus some sustained sunlight, we could have been facing a huge loss in the numbers of many of our beneficial insects such as ladybirds, butterflies and honey bees. Good job the sun’s come out at last!