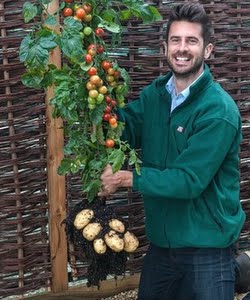 Since its long march began in a cave with a pair of sticks, Scientific Discovery and Exploration has countlessly yielded and redefined what we know to be miracles – irrigation, the Combustion Engine, Apollo 11 and now … the ‘Tomtato’.

No, it isn’t a revolutionary new Sat Nav, but rather the world’s first successful crop of Tomatoes and Potatoes that can simultaneously yield produce both above and below ground on a single plant.

This development has attracted a lot of media attention in the last week and the people responsible are a horticultural firm based out of Ipswich named Thompson and Morgan, who claim that the plants have undergone no genetic modification, but instead been subject to a decade’s worth of experience in the process known as ‘grafting’. In laymen’s terms this consists of cutting the stems of whichever plants you want to combine, ensuring they are of very similar width, and then taping the two specimens together and letting the cut heal and seal them. Of course, the operation itself requires a high level skill to ensure success, as well specimens of similar genus, such as with the Tomtato. 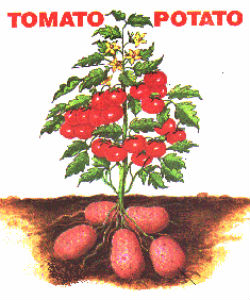 The ramifications of such an advancement are humbling in the extreme – alongside the potential for unprecedented efficiency in the production of these crops, it also begs the question as to what other double crops may yet be possible. Could we one day see the combination of Turnips and Cauliflower or ‘Collinips’?! Perhaps we’ll next learn to graft and grow ‘Chillishes’, Chilli and Radishes?

In particular, the project has garnered interest from Guy Barter RHS member and contributor to Gardener’s World, who had this to say;

“We’re looking at it with real interest because Thompson and Morgan are a really reputable firm with a lot to lose, but I wouldn’t rule out that it could be a very valuable plant to them…”

However, we Brits are not the only ones to have recognised the potential in such a venture, already there are reports of gardening centres in New Zealand launching a similar product known as the ‘Potato Tom’. Who knows, it may be a novel idea but, like so many other discoveries, its potential is huge.