The Ides of Spring

Due to the uncharacteristically wet Springs we’ve suffered in recent years (although not so much the early part of this year!), our blossom trees have suffered accordingly – an unfortunate and somewhat alienating side effect, as the common cherry blossom symbolises for many the dawn of spring. Blossoms, aside from signalling the beginning of the new flowering season, have maintained many different alter egos among different cultures and civilization, including that of mortality due to their fleeting life cycle and their pre-emptive appearance to the birds of spring and other accompanying wildlife. In Japan, the common cherry blossom is synonymous with clouds and is thought to symbolise this ephemeral quality of life. In fact it is so highly respected for its iconography that the Japanese hold an annual festival celebrating it. The festival, known as Hanami, is one of the oldest in the world, with its core principles thought to have originated in the 5th century AD.

Of course, we cannot pigeon-hole the term ‘blossom’ merely to the candy floss trees that appear on the streets and lawns of Britain every spring. Blossom, by definition, refers to any tree that bears clusters of flowers and species such as Magnolia and Hawthorn, and are often categorised as such. It is common, however, for the layman to define a blossom according to their experience of such fruit bearing genus as Malus (Apples), Prunus (Cherries, Plums or Peaches) or Pyrus (Pears). 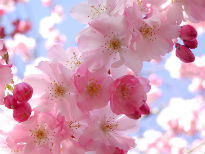 However, numerous different varieties of Cherry blossom have been imported from Japan to the UK in recent decades and it’s not difficult to understand why, as we can discern from the opinions of horticulturalists Simon Tetlow and Tony Kirkham.

“The first blossoms give that feeling that you’ve beaten winter and the worst is behind you… It’s the promise of things for the year ahead; good crops for later in the year and nice sunshine to be working in as summer approaches.”

Tony Kirkham of the Royal Botanic Gardens at Kew echoed the deputy head from Tatton Park’s feelings on the matter:

“As soon as trees come into blossom, spirits are lifted…The last three blossom seasons have been patchy at best… and while it may seem like blossom is early this year, in fact the season is right on time”.

In fact, the popularity of Japanese import in the blossom market has become widespread enough to encourage an investigation into their standing against endemic species such as the Wild Cherry, an inquest into which the Natural History Museum is into its third year. Their findings have shown that despite its abundance on our shores, the Japanese Cherry Blossom is in fact only second in popularity to our native Wild Cherry and both find their most regular application to be in the setting of private gardens.

Now we’ve spoken exhaustively about the better known varieties of blossom, I’d like to talk a little about my personal favourite and how to care for it, in the hope that, with it on your minds, you might plant a few of them and thus I’ll get to see them more often. Selfish I know but anyway here she comes.

Cydonia oblonga is a small deciduous tree and more commonly referred to by the title of the fruit it bears – the quince. Shortly after the final frost, this cultivar will bear deep or pale pink flower clusters against soft, ovate leaves. However, my penchant derives as much from the fruit as from the blossom itself, which in early autumn appears a tawny gold colour and is both beautiful and highly fragrant.

Front Garden Design
The Darker Side of the Forest