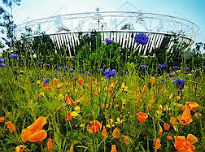 Now that we’ve reached the midway point of London’s Olympic/Paralympic frenzy, we’ve been reflecting on the lasting effect that the games have, and will have, on our capital and our country, more specifically in an ecological and horticultural sense. Of course, the greatest difference the games have made in this respect is the construction, maintenance and continued existence of the Olympic Park meadow gardens which, among sites like Wisley and Tatton Park, constitutes one of the largest green projects in British history – even more amazing given the Stratford site was a toxic wasteland before they started!

In light of this, it seems somewhat askew that those directly responsible for this magnificent achievement remain fairly in-the-dark in terms of recognition, despite the fact that this single aspect of London 2012 has been the labour of love for thousands of people for over two years. This piece is for them, for their hard work and innovation and, most of all, dedication to what has been, at least in public terms, a largely thankless endeavour.

The Olympic Park’s head gardener is Des Smith who, for our purposes, is the face of a huge collective responsible for the gardens. He has stated that the plant choices of the garden were based around international unity and by this he means that each section of the garden was planted based on the endemic cultivars of each of the five continents to participate in the games, jokingly admitting that even he was unfamiliar with some of the species suggested by the Professors at Sheffield university who compiled the plant lists, and saying that ‘We’ve all had a steep learning curve.’

One of the greatest challenges for the maintenance team, however, has been the ‘out of sight, out of mind’ position that, much like high end caterers for example, their labourers had to adopt – meaning the vast majority of maintenance had to be carried out under cover of darkness, so as not to disrupt the games themselves.  For example, there have been curious images of gardeners mowing the lawns in the middle of the night.

The site was not without its perks though. The proximity of local landmarks such as the Thames estuary meant that the designers could incorporate icons exclusive to London amid the garden itself.

Smith has confessed, somewhat wistfully, that the project will stay with him, in that:

“Going away, and working on another site… it’s gonna be a bit of a comedown for myself and quite a lot of the guys…. because we put so much of ourselves into it.”

The project shows a true masterpiece in scale and detail, culture and beauty, and we, at Floral & Hardy, want to thank all those involved in the project, for both a wonderful legacy for future generations, and for the inspiration that only such a grand scheme can provide.

There are also annual meadow gardens and areas of wetland too and the best news is, once the temporary buildings and huge concourses are removed these wilder areas will be extensively enlarged, so, when the gardens re-open in July next year as the Queen Elizabeth Olympic Park, if you didn’t manage to get tickets to this year’s sporting events, you’ll be able to see them then.