The People of Olympia 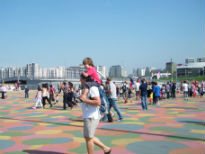 This piece was written in regards to, not only the visitors of the Olympic Park, but also as a gesture of gratitude to all those who worked and volunteered in order to make this wonderful experience possible. It also speaks volumes about the success of the grounds that its workforce were so diverse and gleeful a group – consider this a thank you note to those responsible for said glee.

Let me begin at the beginning – admittedly I was slightly disconcerted on arrival by the presence of the armed forces/metropolitan police in such great numbers and (wrongly) expected a good deal of pen pushing and a ‘no diving around the pool’ attitude. I couldn’t have been more mistaken and was thrilled to have my pre-conceptions shattered by the courteous and efficient manner in which they conducted both themselves and us. 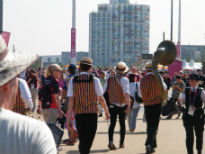 Next we were, as a people, addressed by brightly dressed umpires who from their thrones wished nice days and good times, intermittently to the throngs as they passed, welcoming responses and conversation from child and adult alike and, considering they’d been perched for several hours in blistering heat and flak jackets, their high spirits were a welcome surprise.

Having now entered the park proper, our care had fallen over to the stewards whose charge it was to ensure everyone’s well-being and of course the well-being of the gardens themselves – one was quick to direct me back to the path once I’d wandered from the beaten track in hopes of attaining some exclusive photographs. 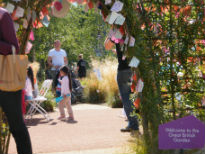 This occurred whilst we were enjoying the sights of The Great British Garden, a section of the park overseen by a group of British Primary and Secondary schools designed specifically to engage younger visitors in a variety of games and sporting activities. One of the more sentimental aspects of the GBG was the presence of their messages wall, wherein people were able to leave a miniature review of the garden and their good wishes for the athletes – literally a wall of praise for such a wonderful event. 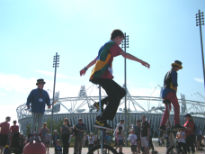 Now of course the Park could have the greatest service team in the world, but it’d be in vain without the people filling it – people like Jonathan the Jester and his partners in crime from the Table Top Circus, who spent the afternoon beguiling onlookers and proving the Olympians were not the only ones capable of feats of agility and skill. The trio’s performance ranged from juggling whilst stood atop a beach ball, to synchronised unicycling. 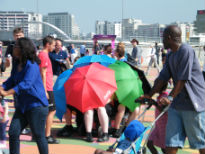 There were other performers too, ranging from brass bands to singing groups and even some guys mimicking a miniature tube train with umbrellas – ‘mind the doors please!’ 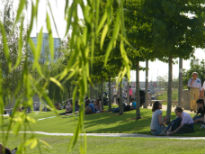 Finally we have the crowds themselves – us – the onlookers.  I’ve been to a few music festivals and once or twice to various theme parks and that is the atmosphere most akin to what I saw in Stratford – unbridled frivolity and fun. Had your television broken the month before you might not have realised this was the seat of the world’s greatest athletes, but merely an extremely successful summer fete – maybe with an added RHS project, looking at the gardens.

In closing, whether you like sports or not you owe it to yourself to visit the Olympic Park when it reopens next year. The place stands alone from the Olympic event itself, much like the Mona Lisa does from the Louvre, and having seen both I’ll take the sunshine and jugglers any day.

Involved with the Bulbs
Atop Olympia