The Shape of our Cities

In our initial report on the Ecobuild conference we touched on a seminar given by Duncan Baker-Brown representing BBM design and titled ‘Searching for an eco vernacular’ wherein he described briefly the imminent need for change in our architectural infrastructures. Due to the global distribution of wealth, we’ve entered into a temporary bargain with the resources of our planet to tailor to the minority with the capital to make it so. Brown cited the modern metropolis as an example of how modern ecology’s detriment id due to what he referred to as, ‘linear metabolisms’. 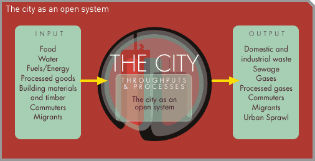 The terms linear and circular metabolisms stem from the theory of commerce in contemporary cities, particularly those of trade and GNP. It states that a city’s ecological footprint must be measured by the sum of the area that the city occupies, but must be inclusive of the resources it requires to maintain its inflow of food, construction materials, consumer products and migration, the amount required to process the city’s waste in order that it be integrated in the environment, a major problem posed by pollution, and how much land is required outside the city to cater to these needs.

Based on these principles, sustainability specialists such as DEFRA (UK Government Department of Environment, Farming and the Regions) have been able to assess the approximate ecological footprint of metropolises such as London, which function based on a linear metabolism. The fundamental difference between a linear and circular metabolism can be measured by each system’s efficiency in regards to its resource management. It is fair to say that while a linear system will rely on a great abundance of resources, despite the fact that its efficiency may suffer, a circular metabolism will put greater emphasis on recycling as a means of maintaining geographical independence, not to mention a sustainable ecological footprint. 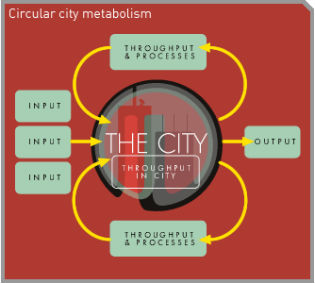 A highly successful past example of circular metabolisms is that of the current economic giant whose twelve major cities, in terms of populace, were a functioning example of how consistent reliability on domestic products bred financial independence among its population and, as a by product, a more lengthy shelf life upon which to base the cities limitations and sustainable potential for growth.

London was referenced as a key example of the long term impossibility of linear metabolisms, based on studies undertaken by bodies such as DEFRA, some unsettling statistics were compiled concerning our Capital’s productivity when weighed against its ecological footprint. It was estimated that despite Britain’s protests as an emergent force in ecological sustainability, our dominant population centre requires an area over a hundred times its existing size to support the current consumption of its populace. A case study that Brown cited states that London’s current surface area assumes approximately 160,000 hectares, while the collective mass of its input and waste materials requires an area of 20,000,000 hectares – equivalent to Britain’s entire yieldable landmass!

Of course the primary motivation of initiatives like DEFRA’s is to establish how such consumerist societies can be more effectively managed, in order that the gulf between production and consumption may be lessened if not bridged. It is at this point that the concept of circular metabolisms finds its role, because by definition it depends upon the local resources of a populace in order to function. Due to the country’s traditionally agricultural foundations in finance, China has been the most consistent example of self-sustainable metropolises. In fact until recently China’s twelve major cities were all based on circular metabolisms, which in turn saw their rise to economic prominence following half a century of war, and the continuing employment of communism in a global market rife with capitalism. Unfortunately, the rising demand for fossil based fuels and products has contributed to a linear necessity when concerning first world nations and, if left unchecked, could make circular production impossible.

However, outside of architects and politicians, all this information begs the question as to what an individual can do about it?  We’ll be continuing this topic in a later article, wherein will be discussed a variety of ecologically efficient alternatives to current residential applications, so that at least we can all do our bit towards achieving a more sustainable Britain.