The Shelf Life of a Show Garden

In my previous blog I shared my thoughts on this year’s Hampton Court entrants, from the point of view of a judge, based on skill and imagination. In retrospect, however, it begs the question of a garden’s purpose – should artistic merit overtake its function as a garden?

Many of the more esoteric beauties I, and thousands of others, witnessed could only serve as a sculpture in a modern garden, becoming a perpetual maintenance routine if one should wish to utilise the space. To this end I’ve reviewed my previous opinions and repealed most of them in response to the relatively short shelf life of these expensive investments. Unlike a gallery, the show garden doesn’t offer art to take home in a box and when a space is wrought with structures too high to sit on or too hard to bounce off, or a marble orb where could be a fountain, or the garden’s canvas leaves no room for a gallery floor, the practicality of these exhibits as usable spaces has to be put in question. 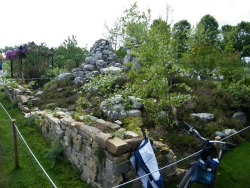 I’d like to start with one of the poets’ gardens as these, I found, were at least partially balanced between function and form. Wordsworth’s reimagining in Rural Architecture leaves a choice to its audience – that it may be exhibited or interacted with, and in doing so, pay homage to the words themselves.

However, its aesthetic merit is somewhat lack-lustre when considering its primary function – rustic and understated can be achieved without show garden price tags. Nothing differentiates it when held as an ornamental piece. 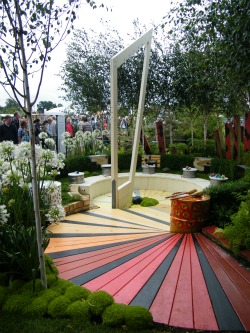 The Jabberwocky received a bit of a slating previously though, despite its fantasy origins, it stands as the most realistic among its neighbours – the confusion of design aspects I chastised, actually affords a balance between its festooning and practicality. It provides a safe and constructive leisure area at the cost of a confident appearance.

I spoke before of my being humbled in the face of Judith Cornford’s Eye of the Internet Maze and it has not been abated by time, including the weighty and meticulous design previously mentioned, but without any preconceptions is a very calming place to inhabit. The box hedges glide to the gardens epicentre and similarly the surrounding beds enforce the liquid structure of the space.

The World Vision Garden I felt would testify to a night viewing of the Palace gardens, its simplicity is astounding and as an installation piece it’s extremely effective. But nothing can grow, play or bear fruit on it and if it is taken at aesthetic, then it is successful but for the average gardener it has no life beyond Hampton Court. 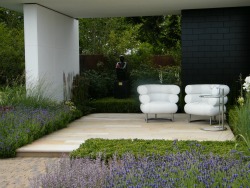 Of this league, Vestra Wealth’s offering was my favourite. Designer Paul Martin here attempts to recreate the principals of architect Eileen Gray, hence the gardens name Gray’s Garden. A garden of muted colour, it relies instead on the static elements it houses. The design treats its empty space and lack of colour as another element and thus its emptiness seems mathematic, rather than wasteful, and despite this attention to detail it remains fairly low maintenance. The entire piece feels like a sturdy but beautiful piece of furniture, gorgeous to look at and simultaneously very comfortable to sit in. Judging a conceptual garden based on its practicality is something of a paradox and, as such, I’ll avoid it here, I would surmise that the concept garden cannot expect a domestic setting nor desires one, as then its message would be lost behind a garden fence. 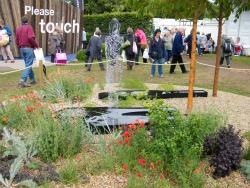 As such, it is more an indulgence on behalf of gardeners that they continue to frequent these shows each year, aside from the obvious gain in checking out the new products that the myriad of stalls have to offer, there is little practical value to the displays. They are merely inspirational pieces, as are the galleries to the new generation of artist.