There’s a Bright Golden Haze on the Meadow…

After with last week’s instalment on colour based foliage, this time we’re continuing with the gold tinted medallists of our gardens. That’s right – it’s time for the amber leaves of our locality to rear their gleaming heads. 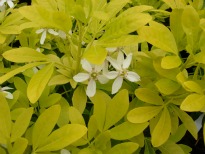 Sharing its name with my second favourite bank robber, (it’s Dillinger for those wondering who number one is), the ‘Sundance’ variety of Choisya is an evergreen shrub with a rounded habit whose palmated leaves are bright golden in full sun and pale yellowy-green in shade. While this foliage springs eternal, its scented, white, star-shaped blooms will only appear in the early summer, sometimes with a second flush later on. As the name suggests, you will achieve the best aesthetic with this plant when grown in full sun, though you should also provide it with a well-drained, clay based soil. 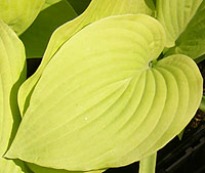 The ‘August Moon’ gets its name firstly from the bright yellow tint that sunlight will give its leaves – one can’t help be reminded of the harvest moon image its colour denotes. The second reason is the mound forming habit it undertakes. True to the harvest moon however, and as a deciduous perennial, it will only appear this way throughout late spring and summer, alongside its pale lavender flowers. The optimum conditions for this cultivar include a heavy soil content, ideally clay or dense loam of moderate acidity, positioned in a sheltered area of the garden with guaranteed drainage. 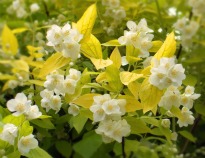 These deciduous shrubs are a dramatic addition to the garden due to their enthusiastic tall, arching habit. With their sturdy branches, they are able to form significant size clumps of bright yellow, opposing leaves early in the year. As the year goes on, however, their foliage will gradually pale to shades of green and even cream. Philadelphus bear highly fragrant white flowers in late spring to early summer. They can survive in practically any soil type, regardless of acidity or content or shelter, the only absolute is that you plant them somewhere visible, or commit the crime of concealing a truly beautiful cultivar. 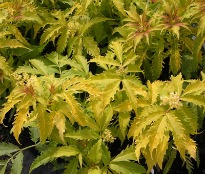 The ‘Plumosa Aurea’ is a variety of Sambucus that can grow either as a moderately dimensioned shrub, or as a small tree, whose finely cut, golden leaves will turn a rich rust colour in autumn. In the preceding months, they’ll also bear red fruit and the scented flowers will appear cream in spring. Best of all, for such a beautiful plant, Sambucus is also extremely adaptable, suited to nearly any soil and aspect, though they are likely to thrive in moderately fertile soil that remains well drained. They will also tolerate intense pruning to maintain their dimensions. 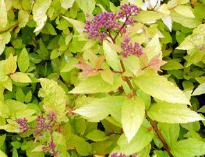 ‘Goldmound’, as the name would suggest, is a dense, deciduous shrub possessed of golden foliage starting early in spring. As the year progresses, so the foliage will deepen to shades of green in the summer and orange in the autumn. The plant will also bear clusters of pink flowers from spring to autumn, though these are not scented, and, while ‘Goldmound’ isn’t picky about soil structure, it is important that you provide it with full sunlight, both to benefit the health and the appearance of the plant.

Hopefully this list has provided ample selection for the gold-fingered among you and, if not, there are a myriad of other cultivars waiting to be discovered to give your garden the sunshine lift that golden foliage can provide.

The New School is Green
More than Just a Lawn