Through a Hedge Backwards 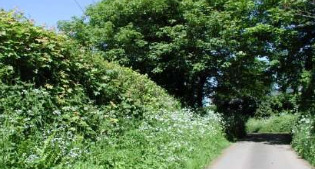 The traditional hedgerow is an institution of the British countryside and as well as its practical application, it serves as an indispensable anchor to our horticultural heritage. Since agricultural production grew to a mass scale in the middle ages, the hedgerow has been employed as a cost effective and eco-friendly land divider and it is due to this use that it became so prevalent in the ensuing centuries. 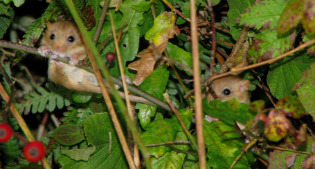 Since integrating with the indigenous countryside, the hedgerow has played host to an eclectic variety of British wildlife, many of which are becoming increasingly rare; wildlife such as the Brown Hare, the Song Thrush, the Dormouse and the Stag Beetle, and wild flowers such as the Bluebell and Ragged Robin.

When we talk about hedges, many of us might think of thriving garden boundary hedges, shrubbery mazes or ‘hortisculpture’ in show gardens. The rural hedgerow is rarely thought of as a species under threat, however, between 1940 and 1990 the common hedgerow underwent a dramatic decline predominantly due to human influence. This was through a combination of urbanisation, a rise in agricultural demand and its subsequent intensity, overgrazing by livestock, and improper maintenance.

The other major contributor to the hedgerow’s decline is the dreaded Elm Bark Beetle – dum-de-dum-dum-dum! This is a carrier species of Dutch Elm disease which is named for its initial discovery in the Netherlands and its origins in East Asia. It is a fungal disease that destabilises or ‘flags’ the branch structure of the Elm species and, having originated from such a distance, the European Elm had no opportunity or necessity to develop a resistance to the disease. 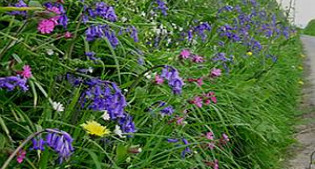 Another key contributor is the collective ignorance or contempt of the 1997 Hedgerow Regulations that demand a removal notice for any hedgerow exceeding thirty years of age. It is these older hedgerows that serve their function most effectively as their root structures have had generations to mature, thus making them a more durable specimen.

The presence of ‘Ancient’ hedgerows i.e. a hedgerow predating the Enclosure Acts period (1720-1840), serves as a link to rural tradition, any ancient hedgerow symbolising a remnant of the past and acting as a reminder of their previous abundance and our obligation to restore them.

In response to this rapid decline and in league with Floral & Hardy’s local BCS and BBAP (Bromley Countryside Service and Bromley Biodiversity Action Plant respectively), a counter reductive plan has been formulated which is designed to recruit and educate you in the means of hedgerow conservation.  In the meantime, what can we do individually to aid the restoration and thereby protect the myriad of flora and fauna that call hedgerows home? Well, the BBAP and DEFRA (Department of Environment, Food and Rural Affairs) websites suggest various conservation methods including:

• Continue hedge laying and coppicing of hedgerows where appropriate and traditionally undertaken.

• Take account of the well being of Hedgerows when planning home expansion or improvement.

• Replenish any gaps within hedges to improve their appearance and potential wildlife sustainability.

Further information can be found at: