Many of us think of the summer as being over when we move into September, but the long range weather forecast is for some unseasonal warm weeks ahead, right through to November.

Here are some plants I’d recommend for their late summer flowering: 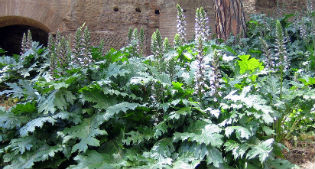 –  the Acanthus leaf is the motif found on many of the columns in ancient Greece and this is a good, space-filling perennial with tall spires of hooded mauve and white flowers June – September above lush green foliage. Great in traditional and contemporary/jungle gardens alike. 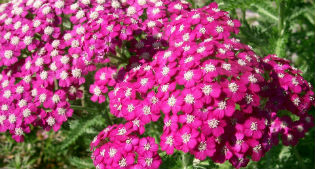 – an easy to grow perennial with attractive feathery foliage and large flat heads of tiny flowers ranging from white, through yellow to terracotta and pink. Again it’s an old garden favourite, but it looks particularly good with grasses and in a prairie-style planting. 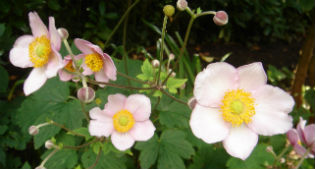 – a tall plant for the back of the border with simple saucer-shaped flowers in white or pink August – October. The great thing is, it will grow quite happily in partial shade. 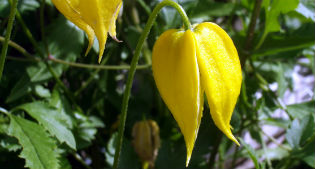 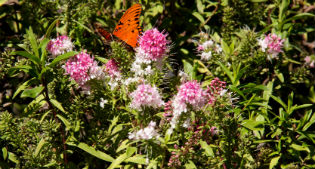 – this is just one variety of a whole group of useful evergreen shrubs that are still flowering at this time. Many of them have purple flowers, but this one is quite a deep pink, fading to white and flowers from June – September, and sometimes even later. 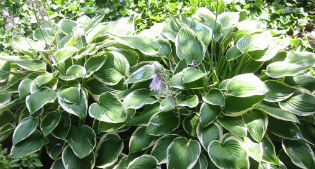 – a beautiful foliage plant with many varieties, most with large broadly heart-shaped, slightly rippled leaves, some variegated, ranging from blue through to yellow in colour. There is also the bonus of spikes of mauve or white flowers July – September. Just watch out for snails and slugs in spring as they love the tender young foliage. 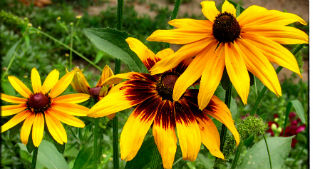 – an easy to grow perennial with bold, yellow, daisy-like flowers with a prominent dark centre September – October. A really cheerful addition to the late summer border. 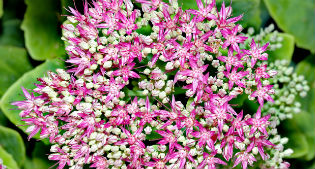 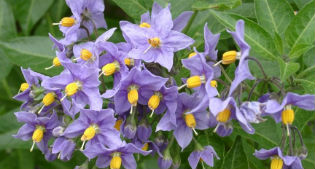 – a relative of the potato, this is a spectacular semi-evergreen climber with clusters of purple-blue flowers with a prominent cone of yellow stamens July – October. Be aware though that it is quite vigorous! 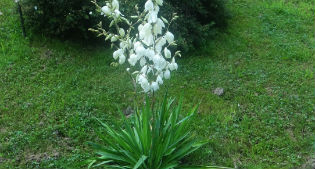 – if you’ve got good drainage, this is one for you – a striking evergreen with a basal rosette of stiff sword-like leaves and creamy-white flowers in tall erect panicles July – September. Great for the Mediterranean-style garden.

1. Continue your routine jobs of dead-heading, weeding and generally tidying up.

2. If you’re planning new borders for next year, now is a good time to start preparing by digging over to at least a depth of 50cms and adding plenty of good compost or manure. Then finalise your planting plan ready for planting out next month.

3. Perennials that flowered earlier in the year can be lifted and divided now. This not only revitalises the plants, but also provides you with lots more plants for free!

4. You can also sow hardy annuals now in the ground where they are to flower next year – you’ll have stronger plants and earlier flowering. These include Calendula (pot marigolds), Centaurea (cornflowers), Eschscholzia (californian poppy), Iberis (candytuft), Nigella (love-in-a-mist) and Papaver rhoeas (annual poppy).

5. Cuttings can be taken now of any shrubs whose hardiness is questionable as an insurance against loss. They will need to be put in the greenhouse or in a cold frame for the winter.

6. Root-balled evergreens may be planted towards the end of the month. These can be much cheaper than container-grown plants so it’s worth shopping around.

7. Continue to check for pests and diseases, especially on roses, and treat as necessary.

8. Rambling roses can be pruned now, ideally cutting out all the old wood and leaving strong new stems which you can tie back in to supports.

9. If you have Wisteria, early this month, shorten the long, whippy shoots to about 30cms from their source.

10. Finally, if you have a greenhouse, now is the time to think about getting it ready for winter – many of your plants will need to be brought inside before the end of the month. Give it a good clean up and ensure any heating equipment is working properly.