Following on last week’s piece on shrubs suited for the shadier parts of the garden, this week we’re writing about those suited to sunnier spots. So without further ado let’s get started: 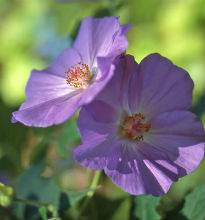 This variety of Abutilon is a semi-evergreen shrub with an upright habit – it is also extremely vigorous, meaning its large purple blooms will provide a stunning addition to your beds. For best results use a sand or loam based soil of neutral ph. level and decent drainage. 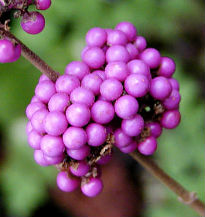 ‘Beauty Berry’, as it is otherwise known, is a medium-sized, deciduous shrub with emerald green foliage, with a slightly purple tint and small lilac flowers,followed by bright purple fruits lasting all winter, that give it its common name. It should be planted in fertile, well-drained soils. 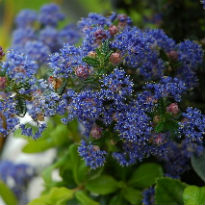 This variety of ‘Californian Lilac’ is a large, evergreen shrub with oblong, veiny green foliage whose titular blooms appear in deep blue clutches from spring to summer. It has a spreading habit and prefers well drained, neutral soils. 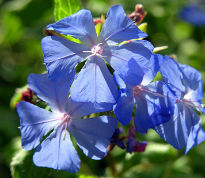 The marvellous ‘Forest Blue’ is a deciduous species that will spread vigorously showing dark green foliage bordered in purple accompanied by bunches of cobalt blue blooms appearing from late summer to early autumn, making it a useful addition to the border for late summer colour. 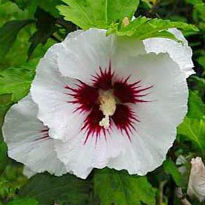 Hibiscus syriacus is an upright deciduous shrub with vigorous growth habits. It will provide toothed, dark green leaves which, during summer and autumn, will appear alongside, in the ‘Red Heart’ variety, large white flowers with, as the name suggests, a deep red centre. This plant should set in an alkaline soil in full sun with good drainage. 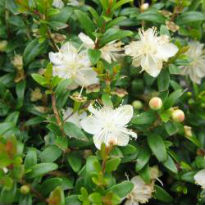 The ‘Tarentum Myrtle’ is a small, dense, evergreen shrub that will bear fragrant, creamy white flowers in summer and matching fruit at the beginning of autumn. It has aromatic foliage too. It prefers a south eastern facing position in free draining soil and full sunlight. 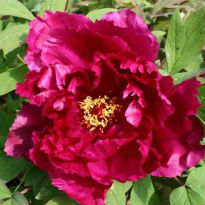 The ‘Cardinal Vaughan’ variety of Paeonia suffruticosa, otherwise known as ‘Tree Peony’, is a medium-sized, deciduous shrub with upright branches. It has deep purple-pink blooms throughout late spring and early summer off-set by its lobed, green leaves. It prefers a humus rich, and full draining soil, ensuring it stays moist throughout the warmer season. 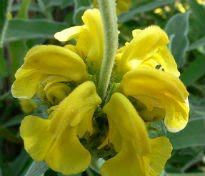 Otherwise known as ‘Jerusalem Sage’, this small rounded evergreen  is so commonly named for the similarity of the two plants’ foliage, which consists of soft, furry, grey-green ovate leaves, but in this case, will be offset by hoods of yellow during the summer months.  Choose a spot away from cold winds for this one. 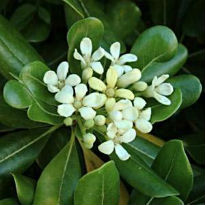 The ‘Australian Laurel’ is a tender, compact, evergreen shrub that has a bushy, upright habit and dark green foliage that, alongside its white, scented flowers in May and June, will retain its colour year round.  It prefers a rich, well-drained soil. 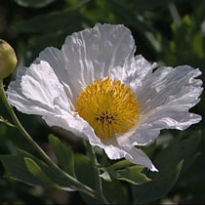 The ‘Californian Tree Poppy’ is a sub-shrub, often treated as an herbaceous perennial as it will often die down in the autumn only to re-sprout in the spring and show vigorous growth to the tune of 1.5 by 2.5 metres in a season. It has blue-grey leaves from spring to autumn and poppy-like, white flowers with yellow centres from July to October. It needs a moist, but well-drained soil.

All of the above are unfortunately susceptible to the wear and tear of the English climate, particularly frost and strong winds, so make sure you give them a sunny, sheltered position in the garden – maybe against a house wall or protected by other hardy shrubs.