Tucking in the Beds 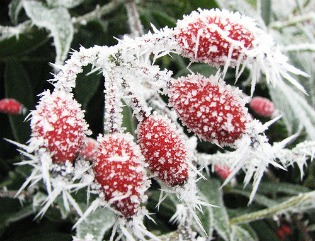 At this point we’ve all been nipped by the Christmas bug and the responsibilities that come along with it, from decorating the house to seeing that a sizeable turkey is secured. However a key concern, if you have not already addressed it, is how to shelter your garden for the oncoming frosts and weathering.

I’ve kicked off by preparing a list of ten essential steps to be taken to ensure you have something resembling a garden come spring time.

The vast majority of freeze prevention can be done at the gardens conception by the clever selection of which species to include, depending on your local climate. Hardier species are obviously of lesser concern however, of course, planting based exclusively on this attribute can lead to a rather limited palette, so we need to look at how to protect the less hardy specimens.

One of the most susceptible types of plants are those that are grown in exposed areas of your garden, particularly those more tenders plants that require cane support such as climbers or vines. An effective and cheap way to protect them is the sandwich technique whereby you erect a wall of cane or chicken wire either side of the specimen and fill the gap between with a layer of fleece or straw, this will not only provide extra support in high winds but will insulate the plant against the coming cold.  This is also effective for plants trained against walls.

When it comes to large leaved and crowned plants, protecting that crown is paramount. To do this, bunch the large foliage together in order to prevent them acting as a sail tossed in high winds and thus degrading the strength of their stems and the crown itself. You may also wish to insulate the trunks by wrapping them in hessian or other similar material in a baguette version of the sandwich technique, again bolstering this with a straw stuffing. 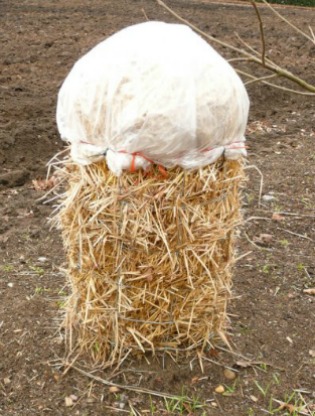 Plants like the Banana are unsurprisingly vulnerable to winter conditions and require greater diligence than most to ensure their protection. Half a dozen wooden stakes encircling the trunk should provide a good frame around which to wrap gossamer or fleece followed by a compact thick layer of straw. All the leaves and side shoots should be removed beforehand and the stake tent should reach the height of the trunk.

By applying an extra thick layer of mulch to the base stems of evergreens you provide a protective roof to the soil that houses its roots, a frost proof vest if you will, that absorbs the worst of the damp that could otherwise threaten the root structure of the plant.

Those most tender among your plants should be either initially housed in pots, or at least relocated to them, in order to afford easy transport and indoor storage over the winter months. If a warm and weatherproof greenhouse is unavailable then take cuttings and provide a smaller environment in similarly controlled conditions until the weather becomes bearable.

You may also wish to invest in a sheet or two of glass or a cloche, preferably corrugated, in order to shelter from the wetter weather your low-growing alpines, and other planting that prefers free-draining conditions. To this end a layer of gravel or silt wouldn’t go amiss to ensure any penetrating water will be effectively drained, once again nullifying potential frost damage.

A Word on Snow

Snow can be both a blessing and a curse in the winter garden. Whilst an effective insulator against the cold and the wind, too much of the stuff can compromise the entire structure of even the largest plants. Good rules of thumb include regular shaking of tree branches and clearing of the greenhouse roof, the one will risk snapped limbs while the other negates the whole purpose of having a greenhouse by blocking out the sun. Rule one also applies to the smaller cousins as fern branches will become deformed if bowed by the weight of the snow. It’s also important to remember that lawns are susceptible to permanent scarring if walked upon during snowy days, not to mention fungal infection.

The Leaves of Autumn

A topic hotly debated in horticulture is what to do with the mass of leaves that will collect on the average garden throughout autumn. For safety reasons, they should definitely be removed from walking surfaces, however what of those on the grass? The immediate risk is that they’ll smother whatever turf they land on, but simultaneously it seems a laborious task to collect them all. A friend once suggested that you simply run the mower over them whilst on the grass and now finally I get a chance to thank them. This deteriorates the leaves enough to allow sunlight and moisture in and also gives them a head start into mulching, a healthy process for the lawn itself.

The key point here is to avoid plastic where possible, particularly in the insulation process as this will inhibit the plants ability to breathe. Insulators like bubble wrap will also contain any moisture that manages to penetrate thus exacerbating any rot problems to which the plant may be susceptible. Also avoid, if possible, feeding nitrogen based fertiliser too late in the season as this will encouraged auxiliary leafy growth whose tender stems will also be susceptible to frost damage.

So, get everything warmly tucked away and then get yourself inside to enjoy the fire and a steaming cup of mulled wine!