When it comes to the world of luxury, you can’t put a price on exclusivity, and horticulture is no different. Recently Thompson and Morgan made headlines and history in their successful bidding war for the world’s rare yellow variety of snowdrop, Galanthus woronowii  ‘Elizabeth Garrison’. The cultivar in question, which moved for a pricey £725, nearly doubled the previous record of £360 that had been held by the ‘Green Tear’ variety. The unique bulb drew more than 30 bidders in what proved to be a fast and furious auction, however, it seems that with snowdrops being one of T&M’s top sellers last year (over one million units sold), they could not let opportunity get away from them. 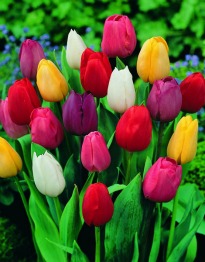 Bidding rivalries like these are not uncommon, and indeed like any scarce commodity, rare cultivars have a history of attracting lucrative clientele and are known for the mass popularity they can inspire once their exclusivity is asserted. The most famous example of this phenomenon was, what is now dubbed, ‘Tulip Mania’, which refers to a period of European, specifically Dutch, history during which the titular flower became the most sought after in the world.

Its continental introduction is most regularly accredited to an ambassador of the Holy Roman Empire (mediaeval Germany), named Ogier De Busbecq, who came across the cultivar in abundance when visiting the Ottoman Empire (modern day Turkey). At the time the Tulip was introduced in around 1554, there were no other flowers like it in Europe; due to the arid climate from which it was derived, it was possessed of petals saturated by intense colouring, making it unique among temperate species.

As the Netherlands had recently gained independence from the Spanish Empire, their domestic economy was in need of commercial property and the mass production of Tulip bulbs by the Flemish botanist Carolus Clusius provided this in spades.  At his post in the University of Leiden, he was able to cultivate varieties of the flower that would tolerate the colder climates of Europe and thus began the Golden Age of the Netherlands. Merchants working out of Amsterdam could expect profit margins of up to 400% from a single voyage to their Ottoman suppliers and, as this new aristocracy emerged, they asserted their fortunes with grand estates devoted primarily to the cultivation of different Tulips. 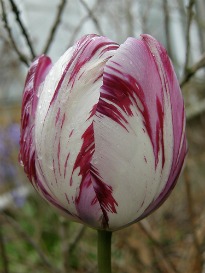 Even more lucrative than the monotone Tulips were those whose bulbs had become infected with ‘Tulip breaking virus’. This affliction meant that the Tulips would lose their ability to hold one solid colour and so would become streaked with combinations of red and pink, or white and red. However the average Tulip bulb takes 7-12 years to mature and so these varieties were few and far between, add to this the virus’ tendency to degrade the bulb before fruition, and these became among the most sought after flower varieties in history. Examples can be seen in many of still life paintings of the time, illustrating their popularity.

However as such a transitory investment, when the Tulip became more commonplace, many investors were ruined and the Dutch economy suffered as a result. It has been argued that the introduction of the Tulip to the continent marks the first economic bubble in recorded history, a landmark of public – rather than practical – value.

Though the Tulip will likely remain the single most significant populist example in horticulture, the lucrative nature of such exclusive commodities did not die with it. In 1998 the aforementioned Thompson and Morgan spent a staggering £50,000 procuring ‘Midnight Mystique’, a unique variety of Hyacinth famed for its black hue, though this sum is dwarfed in comparison by rumour to a variety of Tulip bought during the height of its popularity for six acres of tenure.

Time will only tell whether these records will be surpassed as the race continues unabated for the fabled blue Rose – while there are species that are recorded to fade to blue, there are no known varieties whose bloom holds the colour primarily. So – watch this space!

Clipping the Clematis
Black as the Night