Will the Jubilations never end? We hope not, as they’ve provided a garden shed-load of distraction for this journalist for all the horticultural pursuits it’s encouraged in HM’s honour, and this week is no exception, as today we’re reporting on the extraordinary turfing of York Minster – done a few weeks ago to provide a living carpet for a dinner party some 900 guests strong!

The head caretaker of York Minster, Minister Chamberlain Dr. Richard Shephard has explained not only the benefits, but the necessity of such a grand undertaking,

“The need for funds to restore and conserve the historic fabric of the Minster is never-ending,” he said.

“I’m sure this extraordinary event will do much to assist us in our work.”

Installed across the 1,500 sq. m floor space that makes up the nave of the Minster, the material was previously used to stage an indoor rugby match at London’s Grosvenor Hotel, however, its presence in York was in a somewhat more protective role. Due to the extreme antiquity of the Cathedral, the toughened fibres from which the turf was recycled make for the perfect buffering material to protect the flagstones from the weight of nearly a thousand people, before and after they’ve eaten.

Other applications of the material, which is composed entirely of recycled materials and without the need for soil, have included the temporary establishment of a faux village green in Trafalgar Square and also in the upholstering of various types of grass based furniture.

Due to the profile of some of the guests attending the dinner, and also its royal implications, the grass turf has made news as an excellent fund-raising stunt, much to the Minister’s, and his parishioner’s approval, however, the event is not only in celebration of the Diamond Jubilee, but also in honour of the Minister of the Minster himself. 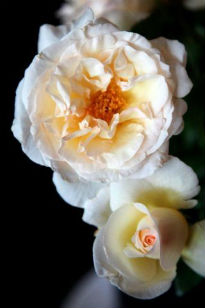 At this year’s Chelsea flower show a new species of rose was presented, the aptly named ‘York Minster’ Rose, and this also held one of the highlights of the ceremony, for which the charity dinner was held.

Among the guests attending the soirée were the acting Dean Canon Glyn Webster, the Archbishop of York, Dr John Sentamu, Lord Halifax and Lord Crathorne. Those of us who were hoping to buy tickets were bitterly disappointed as the £150 passes sold out months before, almost immediately upon their release. Pity, I’d like to have seen this extraordinary sight for myself!