Currently one of the major concerns facing the Woodland Trust is the apparent lack of interest among the general public in the field of ‘Phenology’, or the study of animal and plant life cycles and the effects that climate has on them. According to the Trust, the number of voluntary researchers and contributors to their ecological archives has been on a steady decline in recent years and this has been largely attributed to the average age of those who are helping being rather high, and that many of their regulars are simply physically unable to do it anymore. In response to this, they have sent out a rallying cry to young horticulturalists and wildlife experts that they begin immediately where previous generations have left off –  as one of their officiates Dr. Lewthwaite was quoted as saying  – ‘to pick up the baton.’

The doctor explained that in recent years, and particularly the last few summers, the Trust had noticed a general lengthening of the UK’s growth period and as a result the records for regular growth and habitation are becoming more and more important as a yard stick against which to measure the changes in our environment.

“You might not think it a problem if everything is growing longer, but one of the difficulties is that timings may go out of sync. 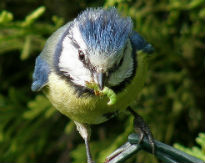 Along a food chain, you have all these perfectly adapted timings, but if the leaves are coming out earlier than caterpillars, and earlier than birds can lay their eggs for the chicks to eat the caterpillars, then those natural timings could be threatened.”

The UK Phenology Network, which is maintained by the Woodland Trust, or ‘Nature’s Calendar’, as it is affectionately known, is therefore under threat, not of destruction, but of ignorance, of being unable to recommend direct courses of action based on evidence, rather than predictions, and it is this evidence that will prove our best armament against the adverse effects of future environmental changes.

The obvious question is, what can You do about it? Well it’s rather simple – by accessing the Trust’s website, and more specifically the part concerning this (still) mighty calendar, you can establish an account in which you can record all your findings, however great or small. It may seem like a menial task, or even that the entire project is too daunting to make a dent in it yourself, but as Jack Cohen would say: “Every little helps!”