Floral & Hardy’s designers are well versed in accommodating a variety of small urban spaces, but when we stumbled across the ‘Banksy’ of the garden world it was certainly an inspiring discovery.

Steve Wheen is a man on a mission to highlight two plights; gardening and the ever increasing, contentious issue of potholes in the UK’s roads. Steve attacks the holes in stealth mode, choosing his location carefully and safely so the gardens have as much longevity as possible.

Steve, like many other cyclists and road users, became frustrated with the state of the roads and felt that this was a colourful way make a statement on the issue. “I find potholes a constant menace and I’ve almost come off my bike several times, I’m also a mad-keen gardener and wanted to make a point,” said Steve. 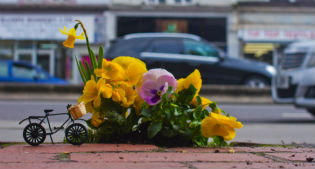 We think that this is a grand gesture towards highlighting issues such as potholes in the road as well encouraging green fingers, and that you can have fun with flowers even in the smallest of spaces!

This one is in Shoreditch High Street.

The Floral & Hardy team are equipped to tackle a variety of gardens, in particular small garden design (perhaps not the size of a pothole!) to large corporate spaces.

Now that the weather is finally starting to show its summer attributes, it’s the perfect time to spruce up your outdoor spaces and create your own little urban oasis. A small garden can often be more of a challenge than a huge open space, carefully considered construction, plants that will flourish well in shady corners – Floral & Hardy can make the most of vertical space and layering to get the most out of your outdoor space.

You can follow Steve’s progress on his blog, as well as a colour gallery of his work, by visiting: www.thepotholegardener.com

Jobs to do in the garden this weekend
Wedding in the Garden?