What’s in a Name?

Etymology, or the origin of words, is a fascinating subject, particularly where plants are concerned. Oft named after the discoverer’s love interest, or for the characters of fables and fairy tales. Or perhaps their origins are just anonymous and lost among the many languages that have tried to classify them. The quintessential English flower, the Rose, for example, made famous by Shakespeare’s Romeo and Juliet for the irrelevance of its etymology – perhaps it was the famous play that so discouraged any real research into the titular blooms origins for so long. It is widely believed to be endemic to the time of the Greek empire, supposedly most prevalent in areas such as Thrace and Macedon, in modern Bulgaria and Romania, although reports also claim it had a footing in the Persian Empire, but the origins of the actual name are lost in time.

However, the history of the names of many plants can be traced back and it was commonplace to name a cultivar based on the myths and pantheon of older civilizations, and the Greeks, who are famous for their tales of adventure and divinity, would often name flowers for the characteristics they shared with the heroes of their stories. For example, the name Narcissus, a downturned flower often occurring in numbers near bodies of water, comes from the legend of the titular Greek hunter and describes a man so beautiful that Nemesis, the embodiment of retribution against the vain, tricked him with his own reflection in a pool, causing him to bend over the water and become ensnared by his own good looks, eventually causing his death. 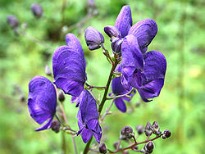 Aconitum, or ‘Monkshood’s’, origins spring from both the hooded shape of its flowers, but also the exploits of two of the ancient world’s greatest heroes, Herakles and Theseus. It is said that Herakles was sent forth to the underworld to claim one of Hades’ beasts as a labourer, but that once they set foot again upon the earth, the beast bled into the ground and from that sprung the first Monkshood shoot. 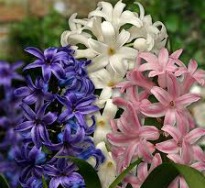 The Hyacinth, whose name was established in the late 16th century, is said to originate from the Greek ‘jacinth’ which referenced a precious blue stone, probably sapphire, and also a fable of the sun god Apollo. Supposedly Apollo struck up an affair with a younger man and quite by accident slew him and now, as a result, each of these flowers has its petals stained by Apollo’s tears with a commemorative ‘ai, ai’ as a mark of his grief. 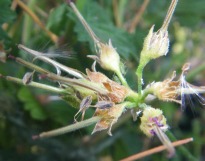 The common Nasturtium derives its name from the Latin phraseology ‘nasitortium’ which literally translates to ‘nose-twist’, no doubt due to its spicily fragrant blooms and leaves, while Perlagoniums get their name from the Latin ‘pelargos’ meaning stork, for the beak-like shape of the seed head. ‘Impatiens’ is simply Latin for impatient, referring to the violent discharge of its seeds.

However, it is not only the translation from their Latin or Greek equivalents that make plant names so crucial to understanding their history, the syntax of the words themselves also defines them. For example, if a plant is applied a masculine in the native language by which it was originally classified then this carries over into the King’s English. Generally plants with titles ending ‘us’ can be safely considered a masculine species whereas, similar to the Spanish and Italian branches of Latin, a name ending in ‘a’ would indicate a feminine species. An example would be ‘Belladonna’, and, although the current and archaic translation of this differ slightly as, while we know the genus commonly as ‘deadly nightshade’, its original form was ‘lady of war’, thus raising not too dissimilar connotations.

Over the course of the 18th century, one Carl Linnaeus of Sweden developed a reputation as the father of modern taxonomy by establishing the now ruling conventions of plant naming. By Linnaeun standards a plant would be named first for its genus and secondly by species. However, as common sense dictated these names were usually relative to a) The discoverer of the species or b) A physical description of the specimen, it is rumoured the Linnaeus himself named the ugly little weed, Siegesbeckia, after the surname of one of his fiercest critics!

So as you can see, it’s all in the name!