Water features can bring the pleasing elements of sound and light into your garden, but the argument between the traditional and contemporary is a long-standing one in any art form, and horticulture is no different. When it comes to the more peripheral aspects of a garden, such as water features, it is necessary to consider how the style of such a focal point will feature in the motif of the existing space. Also, as it is not necessarily a practical addition to your space, a water feature’s size and shape are very customisable, as it needs serve no purpose except the aesthetic.

So, let us begin with the traditional options, the utmost of which of course would be a classic pond or waterfall, because these forms are a regular occurrence in nature and thus are more traditional than any artificial design. Our previous editorials can be referenced for tips on how to approach such a construction. However, there may be a definite theme or stylistic period that you wish to evoke in your garden. 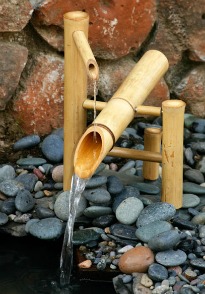 For example, the simple elegance of a Japanese garden might call for placement of a shishi odoshi. Roughly translated to ‘deer scare’, this graceful piece of physics is composed of a bamboo tube suspended on a fulcrum, weighted at one end and hollowed out at the other. The hollow will gradually fill with water causing it to pivot and void into the basin of the feature which in turn will cause the weighted end to strike the stony surround with a distinctive clunk. The beauty of this feature lies not only in its synonymity with Japanese culture, but also the simplicity with which it presents itself and its gradual grace.

Or, you might want to create a formal, canal-style water feature in the Italian tradition, or an intricate, tiled, Moroccan –style courtyard pond – the possibilities are virtually endless. 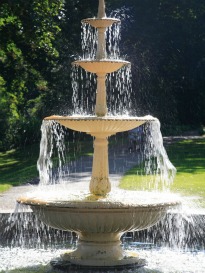 There is also the option of a traditional free standing, or wall-mounted stone fountain with which we’re of course familiar with from many of the major squares in our local city or from the courtyards of many of our stately homes. These are available in a range of shapes and designs and as such they successfully bridge the gap between modernity and tradition, being adaptable to the needs of the gardener as either reproductive of the past or indicative of the future. 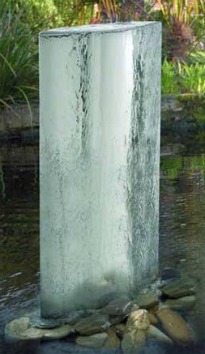 However, while simplicity can be a feature of some traditional examples, it is perhaps the defining feature of contemporary horticulture, not to mention exterior design. No water feature greater exemplifies the philosophy of ‘less being more’ than the water wall, available as either a free standing structure or mounted on an existing wall, it acts as both a fountain and a mirror thus using the old interior design trick of illusory expansion.

In a modern take on the rocky waterfall, we have a variety of stone sculptures, perhaps the most attractive of which is the drilled rainbow sandstone sphere – you’ve probably seen these little beauties scattered among the show gardens this year, as they seem to have spiked in popularity recently. The basic premise is this; the natural colouring of sandstone is heightened by exhuming a ball of the stuff, sanding it smooth and tactile and then allowing water to run over its surface, to give added brilliance to its rings of natural colour. 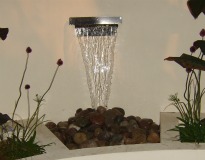 Also popular is the stainless steel,’ letter box’ shape water feature which can be fitted to a wall, so that when activated it will emit a pleasing, vertical curtain of water.

It should be mentioned, of course, that all water features, whatever the style, benefit from good lighting to create an exciting dimension in your night-time garden.